Before the advent of alloys made by Man, adamantite was for many years the strongest metal known. Even today its quality and strength are peerless, save for a handful of rare alloys. That is why they tell of the fool who swallowed a shard of adamantite, only to have it cut its way out of his belly. A salutary tale, to be sure!

The Adamantite item is found on the second floor of the Flying Fortress. Once found, it can be taken to the dwarven smith, Smyth, who will forge it into Excalibur.

In the Ancient Ruins, there is a rock of Adamantite blocking the path to the Invincible. Unei later breaks it, after she is awakened by the Noah's Lute.

Once the party finds a Rat Tail, they can trade it for Adamantite in the Adamant Isle Grotto. If the party takes this to the Dwarven Smith Kokkol, he will combine it with the Mythgraven Blade to forge Excalibur.

Adamantite is a key item, one piece can be found per each Tale's Challenge Dungeon, located on the dungeon's final altar. In many cases, it is randomly generated, but may require also that specific conditions are met (for example, completing the Fabul time-trial dungeon in under ten minutes). It can also be dropped by Adamantite Golem.

Adamantite is found in the meteor Galuf arrived on, and is used to upgrade the airship to fly higher and reach the Ronka Ruins. Later, the party collects Adamantite from the other meteors to travel to Galuf's world.

Adamantite is a valuable Materia Fusion item. When used in a fusion, it will grant Vitality +1 to the new Materia for each piece used. It can be dropped from Crazy Sword (rare), Scarlet Pick (normal), stolen from the G Antenora and the Grandpanzer, and dropped and stolen from the Goliath.

Adamantine is an item that teaches a Guardian Force the Vit+60% ability. Some are also needed to upgrade weapons to their ultimate forms. Minotaur's card modifies into 10, and they can also be obtained from Adamantoises.

Adamant Ore is a rare ore found. It can be mined from some of the more out of the way mines, or dropped off of the legendary Adamantoise. Adamant ore can be fashioned into a wide variety of adamant weapons and armor.

The strongest material known to exist in nature. Mention of this metal in the oldest records of Ivalice attests to its long-established uses.

Hardest known naturally occurring metal, its strength surpasses that of most alloys.

Adamant Ore is a high-ranked Durable Metal that can be Scavenged from Soild Stone in the Feol Warren. It can be used to craft Laevateinn, Divider, Holy Lance, Arcturus, and Save the Queen.

A mineral boasting diamond-like hardness. Functions as a transformational catalyst.

Adamantite is a mineral that costs 220,000 gil to buy. It is used in upgrading equipment. Although its name is very similar to most of the Oretoises (including Adamantoise and Adamantortoise), they cannot be dropped at all.

The Adamantite drops from the Long Gui, but the drop rate is low. It is used for various medium-tiered gear and sells for 10,000 gil.

Adamantite is a valuable ore that can only be mined from a floating island in Azys Lla. This rare metal is used to forge some of the most advanced equipment in Heavensward.

A fragment of the rare metal contained within an adamantoise's shell. This material cannot be substituted, and thus fetches prices even billionaires would gawk at.

Adamantite is a treasure dropped by the superboss Adamantoise. It sells for 15,000 gil and adds the Limit Break effect to Elemancy.

The Adamantite is a common Mission item, and boosts the party's Defense if taken along on a mission.

This beautiful greenish-hued ore is obtained from the fossilized remains of an adamantoise.

The Adamantite returns as a loot, and can be obtained by completing the missions "Seeking the Stone", "Aid the Serpent", "Foodstuffs: Nutrition", and "Popocho's Chocobos", and is required to make several pieces of equipment, including the Adamant Blade, Tulwar, Claymore, Rhomphaia, Nosada, Stardust Rod, Godhand, Tiger Fangs, Death Claws, Shield of the Four, Dragon Mail, and Adamant Armor.

Material taken from the shell of an adamantoise. Synonymous with "hard".

Adamantite is a material that can be dropped from Giant Crab or Neo Larkeicus, both on Very Hard mode, or created for 320 gil by using up an Adaman Shell, a Tortoise Shell, and Grain of Light x5.

Ore to be used in Dwarvish crafting.

Adamantite makes its appearance during a post-game area. It can be obtained by defeating the Adamantoise in Gladiators' Hall. The amount given upon emerging victorious is randomized, and can be used to craft Adamant gear, which appears to have the highest stats. Depending on the gear piece to craft, some require an adamantite, others two and even three pieces. It also can be sold for 100,000 gil.

Adamantite can be traded for in the Shop for 2,000 gil and a Pink Tail. Adamantite is needed to trade for Adamant equipment.

Adamantite can be bought from A Moogle Shop in the Land of Discord in Confessions of the Creator for 250 KP each. Adamantite is again required to trade for Adamant equipment in the shop.

Adamantite is used as an upgrade material for armor pieces. It comes in five varieties of increasing quality - Tiny, Small, no prefix, Large, and Giant. Each contributes more to leveling up the armor piece, with Giant conferring the greatest boost. 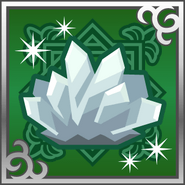