Adamant equipment (アダマン, Adaman?) is a recurring set of equipment in the Final Fantasy series. It is often a high-equipment set, with its pieces consisting of body armor or vest, a hand bangle, and sometimes a sword or dagger. Acquiring it often requires trading rare items, such as a "tail" item or Adamantite ore.

Adaman Sword is a dummied out weapon, and it can only be obtained via a cheating device. The sword is apparently fire-elemental, with an attack power of 138, and grants +20 to Strength. Unfortunately, it cannot be equipped by any jobs. However, it can be thrown by Ninjas.

Adamant Armor is the most powerful armor, not counting Onion Armor, and can only be obtained through trading a Pink Tail to the man in Adamant Isle Grotto. Pink Tails are dropped from the extremely elusive Flan Princesses. Adamant Armor can be equipped by everyone and provides +100 Defense, +20 Magic Defense, +12 Magic Evasion, +15 to Strength, Stamina, Intelligence, Speed, and Spirit, and resistance to all statuses except Doom, HP Critical, Berserk, Slow, and Sap.

Adamant Armor is the most powerful armor, and is part of the Adamant equipment set which also includes the Adamant Shield, Adamant Gloves and Adamant Helmet. The Adamant set is notably some of the few universal equipment pieces, allowing anyone to equip them. This makes the shield of particular value as it is one of the few shields mage characters can equip.

The Adamant equipment can be traded for at ??? on the True Moon, with a Hummingway called Tradingway trading them for pieces of Adamantite, acquired in Challenge Dungeons. The four Adamant pieces all increases all stats by +5, guard against assorted status ailments, three of the items resist a type of elemental damage, and their defensive ratings are among the best.

Adaman Bangle is a high-rank armor in terms of Defense, and can be obtained when the Tiny Bronco becomes available by stealing from Adamantaimai. It provides +93 Defense and +23 Magic Defense, and has two Materia slots, both of which are linked.

Adaman Bangle is an accessory that allows Zack to exceed the HP limit, up to 99,999 HP. Adaman Bangle is a reward for completing mission 7-3-6 and can be found inside a treasure chest in mission 9-2-4.

Adaman Vest is a mid-rank light body armor for everyone except Steiner and Freya. It provides +14 Defense, +2 Magic Defense, and halves damage from fire-elemental attacks. It teaches the Killer abilities Bird Killer and Stone Killer. It costs 1,600 gil to purchase from Dragon's Gate Merchant, Fossil Roo, Conde Petie, Black Mage Village, and Madain Sari. It can also be stolen from the boss Ralvuimago.

The Adaman Hat can be used by everyone except Steiner and Freya. It provides +3 Defense, +33 Magic Defense, and nullifies damage from thunder-elemental attacks. It teaches Gamble Defense and HP+20%. It is bought in Bran Bal and Daguerreo for 6,100 gil.

The Adamantite is an armlet equipped by Kimahri. It has the abilities Auto-Shell, Auto-Protect, Auto-Regen and Auto-Regen attached.

Adaman Armor is a crafted set of high level, heavy plate armor for Warriors and Paladins designed for tanking, easily recognizable by its ultramarine hue. It consists of the Adaman Barbuta, Adaman Cuirass, Adaman Gauntlets, Adaman Cuisses, and Adaman Sabatons.

There exist another set of heavy adaman armor, designed for offensive melee combat, that is cursed under the earthen pact, in the design of the Hauberk. Players wishing to wear those must obtain the appropriate Earthen Abjuration from HNMs (or Einherjar) to remove the curse. It consists of the Adaman Celata, Adaman Hauberk, Adaman Mufflers, Adaman Breeches, and Adaman Sollerets.

The ice weakness can be offset by also equipping the Ice Shield or the Lamia's Tiara, or also the Tourmaline Ring or Cat-ear Hood in the Zodiac versions.

In the Zodiac versions, the Adamant Vest can be equipped by the Machinist, Monk, Archer and Shikari jobs.

Adamant Vest is the third strongest armor for Filo, and provides +60 Defense and Magick Defense, +15 Speed, and resistance to fire-elemental attacks, but makes Filo weak to water-elemental damage. It can be found in a treasure chest in Mission 8-5 - Fighting Back Tears at Roda Volcano.

Adamant Bangle is an accessory that increases HP anywhere between 800 and 1,500, depending on its level, and is obtained by upgrading the Diamond Bangle using the Adamantite item. It can also be further upgraded into the Wurtzite Bangle using the Dark Matter item.

The Adaman Vest raises HP by 36.

Adaman Armor is the third strongest armor, and provides +58 Defense and +3 Magic Resistance. It can be obtained by completing the mission "Armor & Turtle" which requires the items Adamant Ore and Rat Tail. Adaman Vest provides +30 Weapon Defense and +3 Magic Resistance, and teaches the Maintenance ability to Alchemists and Thieves. Adaman Blade is one of the strongest blade-type weapons in the game, second only to the Ebon Blade. It provides 65 attack and 15 Weapon Defense.

Adamant Armor is the third strongest armor, and provides +54 Defense and +3 Resistance. Adamant Vest is a low-rank armor and provides +30 Defense and +3 Resistance. It also teaches the ability Safeguard. It is obtained by sending an earthwyrm crystal, adamantite, and a pink tail at the bazaar. It must be re-unlocked upon purchase. Adamant Blade has the third-highest power of any blade, and has 55 attack. It teaches Flee to the Sky Pirate class.

The Adamant Gauntlet increases Defense by 100 and grants Endure effect. It can be obtained in the Agito tower.

The weapon Adamant has an dagger icon before its name. It is the only adamant equipment and the most powerful knife available, sporting an attack power of 50. It can be bought for 3400 G in Muu (Future). When used as an item, it casts Ice 1 in battle with a spell power of 18.

Adaman Jerkin is the strongest armor, being usable only at level 70 or higher, and provides 74 Defense. It is bought for 3,284 gil.

The Adamant equipment consists of the Adamant Knife, Adamant Shield, Adamant Helm and Adamant Vest. They can be traded at the shop for Crystal equipment and Adamantite, and have high stats that make them among the best equipment in their equipment type. When any three Adamant equipment pieces are equipped, the wearer receives the Midair Evasion Boost ability, and the "Adamant Chains" Combination is activated, granting the wearer +15% Bravery when they dodge an attack.

The Adamant equipment returns with similar stats, and again rewards the Adamant Chains Combination and Midair Evasion Boost ability, though the Bravery boost from Adamant Chains is reduced to +8%. 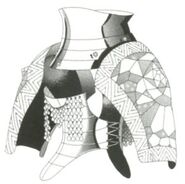 Adamant Blade in Final Fantasy Tactics A2: Grimoire of the Rift. 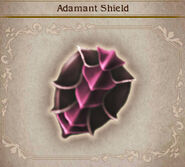 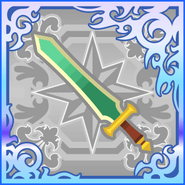 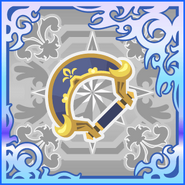 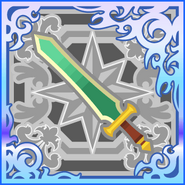 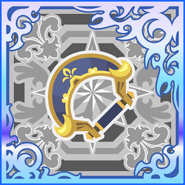