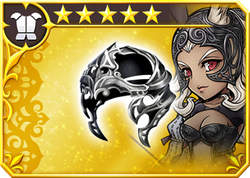 Adaman Hat is a mid to high-ranked hat that provides 3 Defense, 33 Magic Defense, nullifies Thunder-elemental damage, and teaches the abilities Gamble Defense and HP+20%. It can be equipped by everyone except Steiner and Freya, and can be bought for 3,050 gil at Bran Bal and Daguerreo (disc 4).

Adamant Hat is a mid-ranked light hat that in the original PlayStation 2 version requires the Light Armor 7 license, and provides 29 Magick Resist, +310 HP, halves Fire-elemental damage and makes the user weak to Ice-elemental attacks. It can be bought for 5,900 gil at Mosphoran Highwaste and Phon Coast, found at Phon Coast (Limatra Hills), stolen from Malboro Overking at Tchita Uplands (3% chance), and is made in the bazaar "Light & Sturdy Garb" set.

In the Zodiac versions, it now provides 31 Magick Resist and can be bought for 5,900 gil at Phon Coast and Archades, found at Salikawood (Piebald Path), Phon Coast (The Mauleia Strand), and Tchita Uplands (Realm of the Elder Dream), stolen from Malboro Overking at Tchita Uplands (3% chance), and is still made in the bazaar in the "Light & Sturdy Garb" set.

A hat from the distant world of Ivalice. The crown is designed to look like a turtle shell, and there is even said to exist a complementary vest made with the same concept. It is made to be well ventilated so that heat does not build up.

Adamant Hat is a hat obtained during the Final Fantasy XII event, The Salikawood. It provides 250 HP, 18 DEF, and 28 SPR.

A cap made by sewing together pieces of the hard carapace of an adamantite shell. It is hard enough to turn away blades, supple enough to absorb impacts, and light enough for unhindered movement. The only drawback is its center gravity, which is slightly shifted to the right.