The Adamanchelid is an enemy in Final Fantasy XIII. It is a juvenile Adamantoise, and is the mark of Cie'th Stone Mission 33. The Adamanchelid is easily recognizable by its lack of tusks, lack of ankle chains, and comparatively smaller stature, though it still towers over the party members. Because of its smaller size, it does not have targetable forelegs.

Adamanchelid is the only Oretoise that the party is forced to fight, as they save a PSICOM soldier from one during the assault on Eden.

I have been charged with putting down a stray adamanchelid that wanders the steppe's eastern tors, no doubt seeking its lost parents.

What kind of monster could preform such a deed? Not a day goes by I don't recall the pain of losing a child to a rampaging beast. Would I now subject other parents to that fate? No, I forsake my Focus. The cycle of suffering ends here.

Adamanchelids attack by stomping their legs, dealing high damage if the party is not leveled enough. Bay inflicts Daze to all party members, and Quake deals Earth-elemental damage. They are fairly slow and susceptible to status ailments. They are weak to Ice. They use Quake after five stomps, and then Bay after another five stomps.

The easiest way to bring it down is to exploit its weakness to Daze. This way, even a low-level party can take it down. Having Fang as leader (as she is likely the first to learn Daze) the player can cast it manually and keep reapplying it. Recommended paradigm is the Smart Bomb (SAB/RAV/RAV), with characters who know Blizzard spells as the Ravagers.

Once the player is on a higher level they no longer need to manage the battle with Daze, but Smart Bomb still works to stagger it quickly. Once players are of a high level, they can easily crush the Adamanchelid by using Evened Odds (MED/SYN/SAB) until Imperil has been inflicted. After the Synergist applies Faith and Bravery, the party should be able to pummel the enemy down. Slow is effective as well, while having Haste on the party. 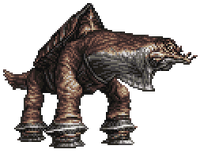 The Adamanchelid appears as a boss in the Record of Eden, Part 3, as well as in selected events. It is able to use powerful single-target physical blows and group-targeting Earth-elemental attacks, Quake being magical and Stomp being physical. When weak the Adamanchelid will use Bay, dealing physical damage to the entire party and dispelling their buffs. It is weak to ice, making Snow particularly useful against it due to his ice-elemental Soul Breaks and Record Synergy boosting his stats.

Retrieved from "https://finalfantasy.fandom.com/wiki/Adamanchelid?oldid=3293231"
Community content is available under CC-BY-SA unless otherwise noted.