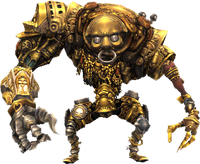 The hulking mechanoids known as acroliths are unique amongst the legions of the Undead Swarm as they are the only inorganic weapons in the Swarm's ranks. These strange contraptions can fall apart as they fight, often discarding entire limbs during combat.

Concept art of the Acrolith.
Add a photo to this gallery
Final Fantasy XI enemies
Retrieved from "https://finalfantasy.fandom.com/wiki/Acrolith?oldid=3212236"
Community content is available under CC-BY-SA unless otherwise noted.