Acid Rain is only used by the Phantom Train in the GBA/PSP/iOS versions. It inflicts major non-elemental damage to the party.

Acid Rain is used by several enemies, and it inflicts Poison and Water-elemental damage to the party as well as inflicting Sap. It has a power of 25 with a hit rate of 100, and it cost 20 MP for the enemy to use. Gau can use the ability by selecting the Adamankary rage.

Acid Rain is an enemy ability used by Epiolnis that inflicts Poison-elemental magic damage to the character with the highest HP. It has a power equal to 1.25x the enemy's Strength stat, dealing roughly around 645 damage.

Acid is an ability that has 3 uses and has an attack power of 4 which damages a group of enemies, the damage formula is base on Mana. This ability is used by Amoeba, Atom Ant, and Scarab.

Acid is a magical attack that has 5 uses, it also increases a Robot's HP by 9. The damage formula for Acid is the user's Mana x5. The ability target's all enemies, and deals Poison-elemental damage. This attack can be used by Amoeba.

Acid Rain is the level 3 offensive-type Special Move for staves. It lowers the P.Def of all enemies by 25% then strikes with a water-based attack. For the duration of the music, the P.Atk of all allies is raised by 25%. Music bonuses will stack with other attribute bonuses.

Toxic Rain is a Special Ability similar to Acid Rain, although the former deals x1.8 water and wind magic damage ignoring SPR by 50% and randomly inflicts any of three status ailments. 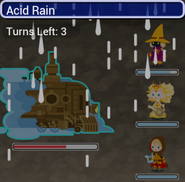 [view · edit · purge]Acid rain is a rain or any other form of precipitation that is unusually acidic, meaning that it possesses elevated levels of hydrogen ions (low pH).

[view · edit · purge]Rain is liquid water in the form of droplets that have condensed from atmospheric water vapor and then precipitated—that is, become heavy enough to fall under gravity.