Ace uses luck to his advantage in battle. Thanks to how quickly Cut Cards charges, he can constantly fill out his hand and play cards to support his allies or activate potent attacks. Draw early and often to have your gambits pay off!

Ace's default outfit, "Akademeia Winter Uniform", is based on his main appearance (

) in Final Fantasy Type-0. He wears a black jacket with gold shoulder pauldrons, white pants, a brown pouch on his left thigh, and a red cape that represents Class Zero. This outfit has two alternate costumes: one coloration resembling his Gold Mantle ( 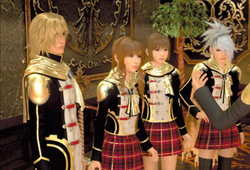 ) attire from the HD re-release, and one resembling his Formal Uniform (

) from Final Fantasy Type-0: a white shirt with black details and the Vermilion Bird crest, a black necktie, black pants and the same pouch and red cape of the Winter Uniform. Ace wears a pair of black gloves with white-striped details. The first alternate coloration recolors his shirt gray with blue accents, his pants white, his cape blue, and his shoes gray. The second recolors his shirt red with white accents, his pants black, his cape red, and his shoes gray.

His second alternate costume, "Combat Overcoat", resembles the Dominion legionaries' outfit worn by the Class Zero members during the opening of Type-0. It has two alternate colorations.

Combat Overcoat III.
Add a photo to this gallery

Ace's Crazy Eights.
Add a photo to this gallery

It is unknown if Ace was summoned to World B and then later dismissed from there sometime between the first and the eleventh cycles.

Unlike most of Materia's warriors, Ace was only summoned shortly after Shinryu's defeat to assist in the restoration of the world.

Ace interacts with Firion, Zidane Tribal, and Vaan near Materia's domain. Ace feels trepidations because he never fought alongside anyone besides his classmates. When Firion asks if they were his friends back home, he replies that he doesn't consider them as such. Ace restates that they were his classmates and adds that some were disorderly while others snooped around. After he likens his classmates to siblings, the other three can relate: Zidane considers his traveling troupe his family, Firion was orphaned twice and was taken in by a rebel group that he treats like family, and Vaan is looked up to as a big brother by younger orphans in the streets of Rabanastre. After Zidane is surprised how others see Vaan as a leader, Firion replies that he is not surprised due to Vaan's natural charisma. Ace complains that everyone around him on campus just wants attention, and Zidane comments that Ace's situation is similar to that of one who has a big brother, referring to Kuja.

After the world's restoration is complete, the moogles give Ace a crystal to host his memories for Materia to use in the upcoming infinitely long war. With a crystal doppelgänger of himself to serve on Materia's behalf, Ace returns to his home world.

Type: Marksman - Ace is a balanced fighter with an arsenal of explosive skills, but can also charge most of his HP attacks for greater area of effect.
EX Skill: Cut Cards - Draws a card of random color, with a maximum stock of four. Activates the top card's effect by holding

. The effect is enhanced if Ace has multiple cards of that color.

Ace is voiced by Yūki Kaji from the original Final Fantasy Type-0, who has also voiced Hope Estheim in the Lightning Saga and Bhunivelze in Lightning Returns: Final Fantasy XIII.

In the English versions, he is voiced by Jonathan McClendon reprising his role as Ace from the original game.

Fourth Anniversary artwork.
Add a photo to this gallery