Offspring of Don Corneo's pet, Abzu. These ferocious creatures live in herds down in the sewers. They immediately attack anything that moves.

Abzu Shoat is an enemy in Final Fantasy VII Remake, fought in the Sewer System during Chapter 14, "In Search of Hope". Several shoats are also fought along with the second boss encounter with Abzu, at the end of Chapter 14, and in the "Three-Person Team vs. Team Ragbag" challenge in the Shinra Combat Simulator in Chapter 16, "The Belly of the Beast".

Abzu shoats are diminutive versions of the creature the large Abzu is. They are quick and persistent, but not very physically strong. Like their parent, the shoats are weak to

Fire. The shoats can be defeated in a few character abilities and fire spells. When they spin, melee attacks should not be used against them until they stop. During the boss battle, the player can take out a group of the shoats with character abilities that hit more than one enemy, such as Cloud's Triple Slash and Blade Burst, Tifa's Divekick and Chi Trap, and Barret's Smackdown and Maximum Fury, or magnified spells.

All attacks have only a slight effect on its stagger gauge. 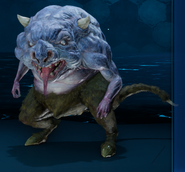 A shoat is a young pig, especially one that has been weaned.