A giant beast that Don Corneo keeps in the sewers. Much more intelligent than it appears, it uses the surrounding environment to its advantage and attacks with sewer water.

Abzu is a boss in Final Fantasy VII Remake that is fought twice as part of the main quest, a water-based sewer monster that is one of Don Corneo's pets. It is fought in the sewers underneath Corneo's mansion in Chapter 10, "Rough Waters", during "Escape to the Surface", and again in Chapter 14, "In Search of Hope", during "Fateful Decisions", where he is joined by numerous Abzu Shoats. Abzu is a horned bipedal monster that can flood the battle arena with sewage and is weak to

Escape to the Surface, Fateful Decisions

Abzu as two phases: it enters the second phase at around half health when it uses Enrage; signified by its horns glowing red.

Abzu is fought with Cloud, Tifa, and Aerith. It is weak to fire and its horns are separate targets from the main body. Its attacks that involve dirty water inflict

Poison. It will use mostly melee attacks, and occasionally jumps to latch onto the sides and pounces at a character, binding them. When it clings to the wall, casting

Fira on one of its horns can pressure it and cause it to fall. Dodging its Pounce makes it stumble. Focusing on its horns with spells can also cripple and pressure it.

After Abzu loses half its HP, it will become enraged and use the deadly Triple Strike attack more often, which can be devastating even when guarded against. Its Blackwater Blast floods the room from one side to damage the party in the affected area.

The horns take minimal damage from physical attacks (unless when Abzu is staggered), but are vulnerable to magic. The horns' HP is 7% Abzu's max HP.

Fira can exploit Abzu's weakness and pressure it, as does crippling its left and right horns. As the boss's stagger gauge does not increase much from spells, Aerith is best focused on healing, while Cloud and Tifa attack with abilities and Tifa's martial techniques with Unbridled Strength. The player should aim to stagger Abzu by dodging its pounce to get an opening with Cloud and Tifa, and by using magic on its horns. Once it is staggered, Tifa's Unbridled Strength techniques can be used to boost the damage it receives. When Aerith is not supporting, she can cast fire spells from within Arcane Ward to deal good damage even if it doesn't build stagger much.

After Abzu becomes enraged, the player should keep vigilant and avoid its attacks and guard at all times, taking advantage of moments when it is stationary to cast spells and use ATB abilities. It is best to keep away from Abzu when it charges its attacks, waiting until after it has finished an attack to move in. When Abzu jumps onto the wall to prepare Pounce, everyone who has the ATB should cast

Fire on Abzu (body, not horns) prevent the Pounce attack.

Chakra Materia lets the player heal poison if the equipper gets afflicted in lieu of restoring health. Equipping

Fire Materia on Cloud or Tifa's weapon works well to deal some extra damage every hit.

Ifrit Materia is the best summon to use, best called after Abzu has already enraged.

Though this is the first battle of the chapter, it is acceptable to spend a lot of MP here, at least on Aerith who will have opportunities to regain it later using Soul Drain and by breaking boxes to collect mako shards. The rest of the enemies in the chapter are regular foes and not too hard to defeat without expending much MP.

Aerith is best focused on spellcasting, and can constantly pressure Abzu if equipped with

Synergy Materia paired with fire, as Cloud and Tifa excel at spending ATB constantly, specially if equipped with

ATB Assist Materia. Cloud and Tifa should both equip the elemental materia paired with fire to maximize the weakness damage. An effective option is to have either one equipped with a weapon focused towards physical damage, while the other has a weapon either with balanced attributes or a magic focus. Tifa is faster between the two, though Cloud has naturally higher MP and magic stat.

For materia setups, elemental and fire should be equipped on Cloud and Tifa both, and for Aerith

Refocus Materia are great on all characters, but particularly Aerith. Either

Prayer Materia or a combination of

Magnify Materia should be equipped; the former will save MP and frees up magnify for another slot, while the latter allows

Regen cast on all.

Barrier Materia are also good options to equip. A variety of

Complete Materia are also useful, including

Magic Up Materia and

MP Up Materia on spellcasters, while the physical damaging character should use

Luck Up Materia and

Deadly Dodge Materia. Cloud and Tifa both benefit from

Parry Materia, though Cloud slightly more so. Refocus should be used on one character.

Steadfast Block Materia is good on all characters, but particularly on Cloud.

Aerith should use Arcane Ward as the battle begins and herself and the other spellcaster (if she opens with ATB Boost, she can place an Arcane Ward and immediately cast a spell after). It is preferable to cast

Haste or Regen. Depending on their role, Tifa or Cloud should either be spellcasting in Aerith's ward.

When Abzu uses Charge or Triple Charge, it is ideal to switch to Cloud and keep him in Punisher Mode (regardless of if he is used for spells or physical damage primarily) and brace for impact, as he is best-suited to reduce damage and can also Counterstance to deal damage of his own. When Abzu prepares Blackwater Blast after clinging to the wall, he can hit the entire party will be hit by great damage. Casting Firaga can knock him down to prevent this, though if this is not possible, Pray or

Cura on all must be used after. If possible,

Manaward can also be cast on all beforehand to resist damage.

Abzu as three phases this time: it enters the second phase when it summons more shoats (50% HP) and commands its minions to use new abilities; Abzu enters the final phase when it uses Enrage (30% HP), signified by its horns glowing red.

Abzu is fought a second time with Cloud, Tifa and Barret. This time Abzu has its shoats backing it up and its tail is targetable. It uses similar melee attacks, which can be avoided. Crippling its horn can pressure it. The shoats can be defeated to help focus on Abzu itself. It can leap to the side and summon water, which should be dodged by hiding behind crates. Destroying Abzu's tail shortens its attack range and disables its tailspin attack.

After losing half its HP, Abzu will summon more shoats. It is later capable of using Pounce, which can stun a character if not dodged, and Triple Charge, which should be guarded against to avoid damage.

The party should use fire spells and character abilities. If a character has the time materia, casting Haste on strong damage dealers, such as those with powerful character abilities, is useful. Pairing time materia with magnify lets the player use Haste on all characters at once. The shoats can be defeated with area-of-effect abilities, such as Cloud's Blade Burst and Triple Slash, Tifa's Divekick and Chi Trap, or Barret's Smackdown and Maximum Fury. Magnified spells, especially fire, also work well, though the player may want to pair magnify with a healing or supportive spell instead. Barret can focus on Abzu's tail to pressure it, and then lay into it with powerful attacks. Elemental materia paired with fire is a useful combination on any party member. Ifrit is still a good summon to call forth. When Abzu is enraged the party needs to be wary and watch their HP even more carefully. When Abzu prepares Blackwater Deluge, the player needs to avoid the big drain; the left and right drains begin pouring at different times.

Fire materia can be paired with elemental on Cloud and Tifa, or with HP or MP absorption on Cloud or Barret. Pairing barrier materia with magnify allows

Barrier to be cast on everyone, while Barret uses Lifesaver to protect the party. Prayer should be sufficient for healing. Again, time materia is very helpful. Deadly dodge is great on Tifa and can be paired with HP absorption to cure her while attacking the shoats. Cloud and Tifa can also benefit from Transference Modules to use Cloud's Ascension or Tifa's Dolphin Flurry more quickly, and Refocus is useful on Barret or Tifa.

The party should destroy the shoats as they appear before focusing on Abzu with abilities and spells as before. Barret can open with Lifesaver and be bestowed with Regen. Casting Haste on primary damage dealers is ideal. Against Abzu, Cloud's Counterstance is particularly effective at resisting damage. Abzu has great mobility, but casting

Stop can render it vulnerable for 10 seconds to Tifa's Unbridled Strength, Barret's Maximum Fury, and Cloud's Infinity's End, though it should not be used just before the end of one of Abzu's phases.

Abzu is most dangerous in the final phase when its leaps are deadly, and the shoats' diving tackles can interrupt the fight. With Lifesaver up, the party can use Pray just before the phase and cast Barrier. The party needs to guard against the shoats and then defeat them while casting spells or using abilities against Abzu in between. They can cast Stop on Abzu after it stops running. With Transference Module, and with sustained damage throughout the fight, it is likely that Cloud or Tifa can finish the battle with Ascension or Dolphin Flurry. Cloud can enter

Berserk state to empower his Ascension further by holding

while in Punisher Mode until he stabs his sword into the ground.

Defeating Abzu will earn Tifa the Way of the Fist Vol. IX. 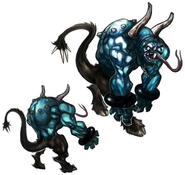 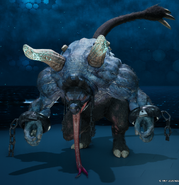