Abyss Worm (アビスウォーム, Abisu Wōmu?), also known as AbysWorm, Lunar Worm, and Red Worm, is a recurring enemy in the series after its debut in Final Fantasy II. It is often the most powerful worm in the games it appears in, if not one of the strongest in general.

Abyss Worm is a rare enemy fought exclusively in the GBA and later releases at Earthgift Shrine in the desert areas, and are usually fought alone or in pairs. Abyss Worm is a highly dangerous enemy, being the strongest of the Worm family, having access to very powerful physical attacks. It possesses the highest HP of any regular enemy in the game as well as very high Magic Defense. Upon defeat, it may drop the very valuable Megalixir.

Abyss Worm is an enemy fought at Jade Passage, and is a considerable threat to the party, attacking in groups of three or more. Abyss Worm will attack with very powerful physical attacks in conjunction with its Cyclone XIII attack, dealing very heavy damage to the party. Abyss Worms absorb Fire-elemental and Death-elemental attacks, and resists Body and Mind attacks.

In the 2D versions, Abyss Worm is an enemy fought around the Red Moon and Lunar Ruins. It is the strongest Worm in the pre-GBA versions, with the Gigas Worm being stronger. It attacks with physical attacks and Bloodfeast, and can counter attacks with Bloodfeast. It is weak to Fire-elemental attacks.

In the 3D versions, Abyss Worm is fought around the Red Moon. It is the strongest Worm. It attacks with physical attacks and Vampire, and can counter attacks with Bloodfeast. It is weak to Fire-elemental attacks and at the time of encounter, should not pose a threat.

Abyss Worm is the second strongest worm, beaten by the Backed Worm. It appears during the Crystals Tale around Kaipo and Damcyan, as well as the Subterrane, and is otherwise identical to its previous incarnation.

Abyss Worm is an enemy fought during "Mission 9-6-1: Toughest Monsters" and "Mission 9-6-3: Weapons Gone Haywire". It is the strongest of the Worm family, having high Attack and Magic and access to the abilities Absolute Stop Thread, Osmose, and AP Gravija. It has low Defense and Magic Defense, and can be interrupted by attacks, so it is highly vulnerable to all types of attacks, in addition to being weak to Ice-elemental attacks. It is valuable for its rare steal, the SP Master materia.

Abyss Worm is an enemy fought at Galbadia in the Dingo Desert and Great Plains of Galbadia, Esthar in the Kashkabald Desert and Talle Mountain, and Ultimecia Castle at Elevator Hall, Treasure Room, Passageway, Courtyard, and Clock Tower. It is not a very difficult foe, having access to the abilities Protect, Shell, Aero, Sandshake, and Saliva. At higher levels, it is possible to draw Tornado from them, making them a good enemy to stock from, in addition to Quake, and are the best source of Windmills alongside their cards.

Abyss Worm is an optional boss fought at Monster Arena after capturing at least one of each fiend in Bikanel. It is the most powerful Worm in the game, and fights very similarly to them with the usage of Swallow, Regurgitate, and Earthquake. However, it deals very high damage with its attacks. When defeated, it drops weapons with Strength +% abilities with Strength +20% being a fixed ability, and armors with Defense +% abilities with Defense +20% being a fixed ability.

An Abyss Worm appears as part of the Ouranos encounter in Copperbell Mines (Hard), circling beneath the sand in the center of the room and damaging anybody on top of it. It occasionally starts searching for fodder, and if it isn't fed will suck the party to the center of the sand pit and deal massive damage to all players. This can be avoided by moving one of the Crystallized Rocks on the outer edge of the arena to the sand pit, as the worm will instead devour the rock. The Abyss Worm cannot be directly targeted by players, and will despawn upon Ouranos' defeat.

Abyss Worms do not appear as enemies, but Burrower: Abyss Worm is a fishing lure. It is notable for being suited for catching Murk Grouper for the final fishing quest with Navyth Arlund.

The Leech enemy is known as the Abyss Worm in the Japanese version, and is the strongest of the worm family. It can be found in the Great Tree. 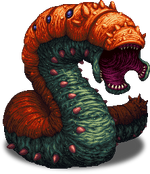 [view · edit · purge]Abyss refers to a bottomless pit, to the underworld, to the deepest ocean floor, or to hell, or more loosely to any chasm or large drop.