Legendary spear with the power of wind.

Abel's Lance (ランスオブアベル, Ransu obu Aberu?, lit. Lance of Abel) is a recurring spear in the series, first appearing in Final Fantasy IV Advance. It is one of the most powerful spears and is usually one of the best weapons for the Dragoon class.

A polearm bestowed by the gods upon the worthy.

Abel's Lance is Ricard's ultimate weapon, obtainable in Arcane Labyrinth sidequest, and the third strongest spear, with the Longinus and Ricard's definitive ultimate weapon, the Wyvern Lance, being stronger. It provides 127 Attack, and +30 Stamina, Agility, and Strength.

Abel's Lance is the strongest spear used by Kain. It provides 230 Attack, 35 Accuracy, and +15 Strength, Spirit, and Agility, as well as a possibility of casting Tornado when attacking with it. The random cast of Tornado works on any enemy, even bosses. It can only be obtained in the Advance and the Complete Collection remakes by completing Kain's trial in the Lunar Ruins. Abel's Lance is initially used by Dark Kain to frame Kain for a series of murders, appearing as the blood-soaked lance. Once Kain defeats his dark side, he takes the blood-soaked lance, which becomes Abel's Lance. This weapon is metallic.

The Lance of Abel is a weapon existing in the game's code, but cannot be accessed by normal means other than by using a cheat code. It had an Attack of 235, and provides several stat bonuses. It would have been used by both Kain and Ceodore.

Abel's Lance appears as a key item in the Tome of Light, Dragoon's Tale: "The Last Dragoon". It was the personal lance of Abel, the master dragoon and Barbara's father. It is adorned with a Crystal containing the soul of the Dragoon, which allows the Warriors of Light to use the Dragoon Job after completing the chapter.

Abel's Spear is a weapon that can be equipped by Jobless, Memorist, Warrior or Dragoon. It provides ATK 30 and ACC +20 is Wind-elemental like all spears. It can be found as treasure in Highwind Tower and initially equipped on Barbara. In Deist there is an old lady in a big house; if the player chooses "YES" when prompted, she'll give out an Abel's Spear.

Abel's Lance is a level 51 exclusive weapon for Firion that provides +37 Attack, -1 Defense, and converts extra HP to Bravery points. It can be traded for at the shop for 15,460 gil, a Partisan, Wyvern Horn x3, and Magnet Shard x2.

Abel's Lance is a level 90 exclusive weapon for Kain Highwind. It provides +65 Attack, -288 maximum HP, -1 Defense, and increases Assist Gauge Duration by +20%. It can be traded for at the shop for 158,000 gil, the Holy Dragon Spear, an Electrum, and Dragoon's Dream x5.

The Final Fantasy IV version of Abel's Lance appears as a Rank 5 Spear. It has 96 power at Level 1 and 147 power at Level 20, without reforging and combining to increase its level cap. It contains the Dragoon's Pride Soul Break for Kain. 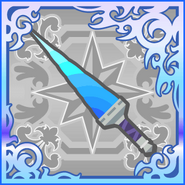 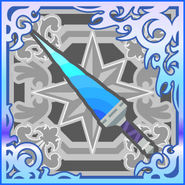 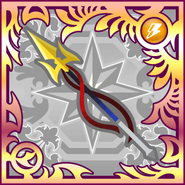 [view · edit · purge]Cain was the brother of Abel in the Tanakh/Old Testament book of Genesis. Cain became the first murderer by killing his brother out of jealousy stemming from God choosing Abel's gift over that of Cain.

Abel's Lance first appeared as Kain's ultimate weapon in Final Fantasy IV Advance, received in his Lunar Trial when he resists the temptation to kill his friend Cecil.

Thus, Abel's Lance derives its name from the same mythos that Kain himself does. Kain's Lance is another Final Fantasy weapon named for Kain in a similar fashion.