Abaddon is a enemy in Final Fantasy X bred in the Monster Arena by catching every fiend inside Sin. Unlocking it will get the party 99 Lunar Curtains. It costs 6,000 gil to fight. It shares its model with the Varuna.
See also: Abaddon

Abaddon has a constant NulAll and Auto-Reflect, minimizing the effectiveness of magic. It will bounce single-target spells off of itself, cast Demi directly on the party, and use Pharaoh's Curse to inflict Darkness (150% chance), Silence (150% chance), Poison (130% chance) and Curse to a single character. Finally, it uses Emblem of the Cosmos, which does heavy damage to all characters. It will indicate this by first using Mana Focus, which is used after being targeted and using Demi, Flare, and Pharaoh's Curse a combined 6 times.

The best option is using the Celestial Weapons, Hastega and Quick Hit. Abadon tends to use Pharaoh's Curse more than anything, so Darkproof, Poisonproof, and Curseproof armor will be useful. 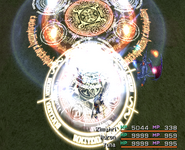 Emblem of the Cosmos. 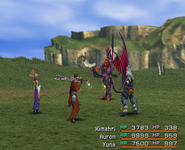 Mana Focus.
Add a photo to this gallery

Retrieved from "https://finalfantasy.fandom.com/wiki/Abaddon_(Final_Fantasy_X)?oldid=3369031"
Community content is available under CC-BY-SA unless otherwise noted.