In its first appearance, Abadon is a storyline boss that attacks the party on their way to Esthar. It appears in the Great Salt Lake at the Dead End. It attacks with statuses, and can Esuna and Dispel to remove positive and negative statuses from the party and itself respectively. It is at this point in the game the player party can include Edea. It is upon defeat of the Abadon the party discover an invisible ladder leading to a passage to enter Esthar. 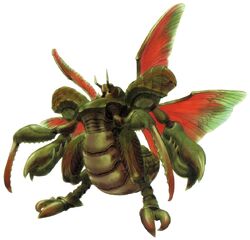 Abadon is a flying bug enemy in Final Fantasy IX. Two versions of it exist in game. the first is the second of three boss battles in Pandemonium during the Not Alone sequence. Initially it is fought by Steiner and Quina, but Zidane joins mid-way through.

A stronger version of Abadon is also later fought as random encounter in Pandemonium. Its Virus Fly attack, available to it during both battles, can inflict Virus. 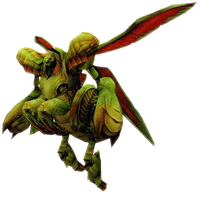 FFIX version.
Add a photo to this gallery 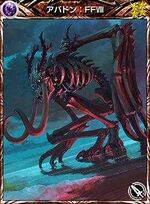 Enemies
Retrieved from "https://finalfantasy.fandom.com/wiki/Abaddon?oldid=3237898"
Community content is available under CC-BY-SA unless otherwise noted.