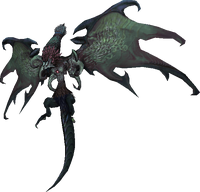 "A Contest of Aeons"

A song used in aeon battles in FFX. It has a breathless quality that does not relent as the wondrous tune and lavish strength pour down upon the player...

"A Contest of Aeons", also known as "Summoned Beast Battle" (召喚獣バトル, Shōkanjū Batoru?), is the boss theme that plays during the final battle sequence against aeons in Final Fantasy X. In the International, PAL and HD Remaster versions, this track also plays when the player encounters Penance.

This track is composed by Junya Nakano. The theme begins with the melody of the "Hymn of the Fayth", then an original part is led by the harp. The final section contains the motive of "Enemy Attack", the generic boss theme by the same composer. It is the seventeenth track on disc 4 of the original soundtrack.

The theme plays when Yu Yevon possesses Yuna's aeons. They turn to a dark hue and turn on the party, and must be felled one by one. The sequence is longer if Yuna has obtained the secret aeons as well.

"A Contest of Aeons" is included in the music player as the eighth track of Memories of FFX album bought from the Wiz Chocobo Post for 100 gil.

"Summoned Beast Battle" is an arrangement by Takeharu Ishimoto appears as the 42nd track of disc 1 in the original soundtrack. It acts as the final boss theme for the duel between Yuna and the Emperor.

The arranged track from Dissidia 012 Final Fantasy and the original PlayStation 2 version can be bought from the shop for 3,600 gil.

This track is used as one of the songs available as downloadable content. It is used in Battle Music Sequence.

"A Contest of Aeons" is a Battle Music Sequence and is available in the base game.

"Alexander Battle" is an arrangement by Yuzo Takahashi, it was released in the soundtrack in 2008 as the twenty-fifth track.

An arrangement of "A Contest of Aeons" is a theme. It is very similar to its original version, but its development was remixed.