We all of us can accomplish far more than we dare imagine.

Seedseer A-Ruhn-Senna is a non-player character from Final Fantasy XIV: A Realm Reborn. He is featured most prominently in the quest line for White Mages and appears in a few major scenes in Gridania. He is the younger brother of Kan-E-Senna and Raya-O-Senna. 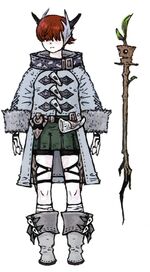 As a Padjal, A-Ruhn has the tell-tale horns. He has bright red hair, though his bangs cover his eyes. His off-white robes are similar to Raya-O's, though slightly thicker.

Though older than he looks, A-Ruhn's status as the youngest of the Senna siblings shows in his stubborn pride as a Padjal, which often puts him in disagreement with his more flexible sister, Raya-O. His interactions with Kan-E are seldom witnessed, as her duties as Elder Seedseer keep her occupied.

He is respected by Gridania as a medium between mankind and the Elementals of the Black Shroud.

As the three commence the ceremony, they are again attacked by the minions of the Guardian Tree, but the soul of A-Towa-Cant manifests for long enough to help fend them off. After imparting to the siblings words of wisdom, he returns to the soul crystal, and fully restores the power in the Healer's Robe. Raya-O reconciles with A-Ruhn, admitting that both his proud sense of tradition and A-Towa's sense of freedom are much-needed perspectives for the Padjal.

At the Guardian Tree, A-Ruhn-Senna and Raya-O-Senna assist Kan-E-Senna in extracting Y'shtola Rhul from the Lifestream following her use of forbidden magic in the aftermath of the Ul'dahn Revolution.

A-Ruhn-Senna is also involved in the new White Mage job quests. The Guardian Tree has begun warning of a "taint," and the last time such an event happened, it prompted A-Towa-Cant's legendary pilgrimage.

The Warrior of Light and Eschiva later bring back a hunk of tainted flesh after their confrontation with Alaqa. The Seedseers remind they are duty-bound to remain in the Twelveswood, leading to Eschiva lashing out at them for dithering in the face of a crisis. These words seemed to affect Raya-O-Senna, who begins to wonder if it is time for them to make a journey outside the woods.

In the level 60 WHM quest, "Healing Hands," Raya-O-Senna and A-Ruhn-Senna make their first trip outside the Twelveewood, where they travel to the Dravanian Forelands where Eschiva and the Warrior of Light last encountered Alaqa. They sense the taint is centered on the caverns of Mourn.

Within the volcanic caves, the four confront the Auri necromancer, who states this is for vengeance on how her people had been treated in the past. The taint is used to sustain a zombie dragon, which is resilient to being killed. The solution is to cleanse the tainted aether using White Magic, though the process takes several tries as the undead dragon keeps resurrecting. Eventually the taint is purified, allowing the zombie to slain for good. Alaqa surrenders at this development, and is taken back to Gridanian custody.

With the crisis averted, A-Ruhn-Senna decides to follow A-Towa-Cant's footsteps by undertaking a pilgrimage across the world, with Eschiva as his bodyguard.

A-Ruhn-Senna appears in a number of White job quests as an ally NPC.

A-Ruhn-Senna and Raya-O-Senna.
Add a photo to this gallery
Final Fantasy XIV characters
Retrieved from "https://finalfantasy.fandom.com/wiki/A-Ruhn-Senna?oldid=3438665"
Community content is available under CC-BY-SA unless otherwise noted.