A-Griffon is an enemy in Crisis Core -Final Fantasy VII-. It is an Angeal Copy.

First encountered in Modeoheim, the A-Griffon is a decent foe due to its high Vitality and Spirit ratings.

Gravity can be used to deplete half of its HP, then attack with critical hits. Alternatively, one can use Gravity Materia twice to leave a quarter of its health left, and finish it off with Jump or attacks from behind. 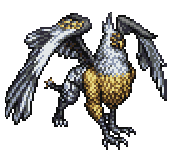 Retrieved from "https://finalfantasy.fandom.com/wiki/A-Griffon?oldid=3368858"
Community content is available under CC-BY-SA unless otherwise noted.