The 15 Puzzle is a secret minigame in the original Final Fantasy that can be played after having obtained the ship; the player must hold the

button while in the ship and press

several times until the game appears. It exists in nearly every version.

In the original NES version the reward for completing the puzzle is simply 100 gil. In Final Fantasy Origins version the prizes are better, including:

In Dawn of Souls and the Anniversary Edition, the prizes are again improved to include the larger scope of items introduced:

The times to complete the 15 Puzzle: 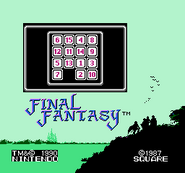 PSP version.
Add a photo to this gallery