1000 Needles (針千本, Hari Sen-bon?), also known as Blowfish, is a Blue Magic spell and a monster ability. Although it is not exclusive to them, the attack has become the trademark ability for the cactuar. The spell sprays a steady stream of needles at a target, and deals exactly 1,000 HP of damage regardless of Defense, armor, Protect or (at times) Evasion.

1000 Needles (also known as Blowfish) is a spell taught by Lamia and Hedgehog to a Blue Mage. It costs 25 MP to cast. The player can also use it by catching and releasing a Lamia, Cactus, or Hedgehog.

The Cactuar can use 1000 Needles (also known as Blowfish) up to ten times in a row for a total of 10,000 HP damage. The Brainpan and Face also know the spell. Strago can learn 1000 Needles as a Lore, which costs 50 MP to cast. It can be learned from Angler Whelk, Brainpan, Cactuar, Dark Force, Face, Humbaba, Samurai Soul, and Gilgamesh.

The Cactuer on Cactus Island may use 1000 Needles to deal exactly 1000 damage to its target.

The Death Machine uses a similar named attack, 100 Needles, but it is a normal attack and its damage can range.

The Cactuar summon uses 1,000 Needles to deal small but fixed damage to one opponent, also inflicting them with

The Cactuar can use the 1000 Needles ability.

The damage dealt for each hit is as follows:

1000 Needles is a level 8 Independent Materia that boosts the chance of Cactuar appearing on the Digital Mind Wave. It begins at 5x, and increases by 1x each level up to 9x. It is a reward for Mission 9-4-3 and is bought from Junon Souvenirs.

The Cactuar uses 1000 Needles when it is attacked. Humorously, the attack itself displays hundreds of '1's to signify each needle attacking the target, but this is only done for comedic effect as the actual damage is shown after the attack has ended.

The Cactuar counters all attacks with 1000 Needles when hidden in the ground. It can't be reflected and works with Return Magic. Quina can learn 1,000 Needles by eating a Cactuar. It costs 8 MP to use. 1,000 Needles can be useful to deal controlled damage to reduce an enemy's HP to low digits, giving Quina the chance to eat it.

1000 Needles is a Blue Bullet learned from Cactuars. It costs 24 MP to cast. 3000-Needle Special is used by an Oversoul Cactuar, which does three 1,000 damage attacks to random party members.

1000 Needles is a Blue Magic ability learned from Sabotenders for the Blue Mages (level 62). It shoots multiple needles at enemies within range. It costs 5 Blue Magic Points to set. When set, it grants VIT +3 and AGI +3. It takes 12 seconds to cast and can be recast every 120 seconds.

1000 Needles is also an enemy ability used by the Sabotender family.

1000 Needles is a Technick. Only the Flowering Cactoid Mark uses this attack, as Cactites and related enemies are docile and often asleep.

In the original version, it is purchased at the Mosphoran Highwaste for 7,000 gil and takes 35 LP to learn. In the Zodiac versions, 1000 Needles costs 40 LP and can be used by the Archer, Bushi and Shikari. Many jobs can give Archer access to the 1000 Needles Technik by virtue of having Infuse, which is next to 1000 Needles on the Archer's board. Shikari does the reverse; it has 1000 Needles, and thus gives Archer Infuse. Otherwise, Archer can only access 1000 Needles and Infuse by unlocking Zodiark or Ultima. The spell can be found in the Sochen Cave Palace. Reddas also knows it.

Even if the user is blinded, 1000 Needle's base hit chance barely decreases; it is helpful when using Sight Unseeing, which requires its user to be blind. 1000 Needles can expedite the controlled demise of enemies, such as bosses whose defense powers up when in HP Critical, when paired with gambits such as "Foe: HP<=1000: 1000 Needles". Its controllability can also aid in the precise HP percentage required for Poaching.

1000 Needles is the Esper Cactoid's attack, but it does not necessarily inflict 1000 HP of damage.

1000 Needles is Cactuar Prime's main attack, and inflicts 1000 damage with every hit, as well as containing a possibility of inflicting Pain or Fog and removing status enhancements. Sentinels can, however, mitigate the damage. The Gigantuar Mark uses 10,000 Needles, which has a base damage of 10,000 and the same effects, though it is not used as rapidly compared to the Cactuar Prime.

1000 Needles can be used by the Cactuar, Cactair and Cactuar Ω. Lightning's Guard abilities do little to mitigate the damage. The Cactair's first two 1000 Needles attacks fail as the needles get stuck in its hair.

The cactuar family can use 1000 Needles and its variants. Since cactuars are encountered at low-to-mid levels, most only use weaker forms, like 100 Needles. The full 1000 Needles move is generally reserved for boss-type cactuars seen in FATEs or quests.

Blue Mages can also learn 1000 Needles. The spell has a 6-second cast time and hits a 4-yalm radius around the caster, dealing 1000 points of damage that is evenly split between all enemies struck by the attack (500 on two enemies, or 333 on three, etc.)

Enemy attacks are not named, but cactuar-type enemies shoot needles. The bestiary entry mentions it thusly:

Quick-footed creature shrouded in mystery. Rumors about this legendary spiny sprinter running across the continent date back to antiquity, yet few have actually seen the cactuar with their own eyes. It is said to launch exactly 1,000 needles at its foes in self-defense, but biologists have yet to find an explanation for the precision of its attack.

1000 Needles exists according to Cactuar, but it is not listed on Final Fantasy Crystal Chronicles enemy abilities.

This section about an ability in Final Fantasy Crystal Chronicles is empty or needs to be expanded. You can help the Final Fantasy Wiki by expanding it.

1000 Needles is the ability of the Cactuar summon. It instantly inflicts 1000 points of Brave damage to the opponent. If their Brave is lower than 1000, 1000 Needles reduces their Brave to zero instead of inflicting Break status.

1,000 Needles is the ability of the Cactuar summon and like in Dissidia, it deals 1000 damage to the opponent's Bravery. It has an Auto and Manual version.

1,000 Needles is a Ranged BRV attack dealing 1000 damage and used by Cactuar and Gold Cactuar.

1,000 Needles is the enemy ability that is used by the Cactuar during battle.

1000 Needles is used by Cactuars when they appear in various dungeons, as well as by boss-type Cactuar variants such as the Jumbo Cactuar. It always deals 1000 damage to the target.

Launch a blur of needles straight ahead that deals exactly 1,000 damage (or 2,000 for criticals).

1,000 Needles is used by Cactuars and Gigantuars. A Blue Mage can learn it by defeating an enemy who has used it in the presence of the Blue Mage. As a Blue Magic, 1,000 Needles costs 100 AP to cast, has a cooldown time of five seconds, and hits the target once for 1,000 damage. It can be moderately useful early in the game, but is outclassed when other abilities become capable of dealing more than 1,000 damage per hit.

1,000 Needles is an active, physical ability that inflicts a fixed amount of neutral physical damage to a single target for 4 AP. It can be used by Cactuar and Master Cactuar★.

The Cactuar card can use an ability based on 1000 Needles. By Dulling the Cactuar, the player deals 1000 damage to a Forward of their choice.

1000 Needles is the special shot of the unlockable Cactuar character. 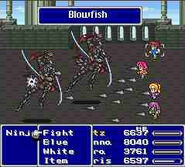 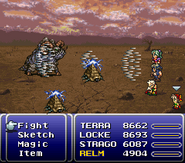 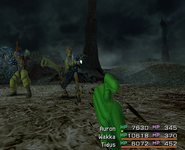 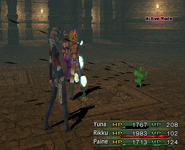 1000 Needles used by the summon Cactuar in Dissidia and Dissidia 012. 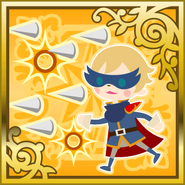 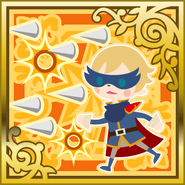 1000 Needles (harisenbon) is the colloquial Japanese name for a blowfish.

In Japan, there is a popular children's rhyme recited while making pinky promises, which says if someone breaks the promise, they must swallow a thousand needles.