Zero-form Particle Beam is an attack used by the Cloud of Darkness each time she moves to a different edge of the area. The attack is fired in a straight line, dealing heavy damage and inflicting Vulnerability Up on any players caught in the beam.

0-form Particle Beam is an aerial magical HP Attack for Cloud of Darkness, obtained at level 38. It requires 40 CP to equip (20 when mastered), 180 AP to master, has Melee High priority, and can induce Wall Rush. It fires an enormous beam that has short-range, and will turn to track the opponent automatically.

0-form Particle Beam is a HP Attack for Cloud of Darkness, now obtained at level 36, requiring 30 CP to equip (15 when mastered), and 160 AP to master. It is otherwise the same as in the previous game.

Zero-Form Particle Beam is the fully-powered version of Cloud of Darkness's secondary Wide-Angle Particle Beam skill, learned at Crystal Strength level 20. To use it to its fullest requires the base skill and the passive from the Voracious Tentacles (III). With both equipped, she will gain the effect "Darkness" which stores energy from Insulating Appendages or Anti-air Particle Beam. With at least 5 stacks of Darkness, Wide-Angle Particle Beam will turn over to Zero-Form Particle Beam, delivering a battery attack that hits all foes and delays the selected target for 3 turns as it deals BRV Magic+HP damage. Darkness resets to 0 after execution.

With the LD Ability High-Speed Particle Beam, Darkness can stack 5 per invocation and can overflow to as much as 20, allowing for multiple calls of Zero-Form in successive turns.

0-Form Particle Beam is a Limit Burst available when the Cloud of Darkness unit at 4 Stars Rarity. It damages all enemies with a 2.3x mutliplier (3x if at Max level). 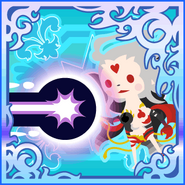 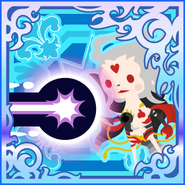 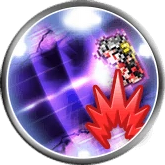 [view · edit · purge]A particle beam is a stream of charged or neutral particles, in many cases moving at near the speed of light.