Does damage equal to user's MaxHP/HP

"????" is a recurring ability in the series. It inflicts non-elemental damage to one target equal to the difference in the user's Max HP and current HP.

???? is an enemy ability used by Azulmagia, Kuza Beast, Tyrannosaur, Wild Nakk, Behemoth, Gel Fish, King Behemoth, Mecha Head, Numb Blade, and Tunneller. It deals damage to one target equal to the difference in the user's Max HP and current HP at the cost of 3 MP. The player may also utilize this ability by catching and releasing a Reflect Mage or a Tunneller during a fight with a Zephyrus.

???? is an enemy ability used by Jersey and Behemoth. It inflicts damage equal to the difference of the user's maximum HP and their current HP at the cost of 3 MP. The player can use ???? as an Enemy Skill if attacked by the skill with the Materia equipped. The ability is physical-based and thus can trigger Cover.

???? is a difficult Enemy Skill to learn at times as neither enemy will use it that frequently. The Behemoth is only fought in an unrevisitable location, and while the Jersey remains available until the end of the game, the player must never attack it for it to use the spell. If they are attacked, they will switch to their second form which never uses ????, and due to a bug in their coding, will never change forms again, making it impossible to learn ???? from that specific Jersey.

???? is used by Azulmagia and Tyrannosaur. It deals damage to all enemies depending on their current HP. Azulmagia's version deals magic damage, while the Tyrannosaur's deals physical damage. 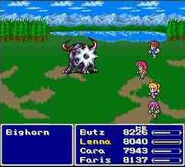