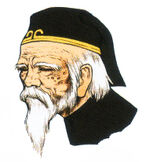 "No matter how many summoners give their lives, Sin cannot be truly defeated. The rebirth cannot be stopped. Yet the courage of those who fight gives the people hope. There is nothing futile in the life and death of a summoner."
—Yo Mika

Yo Mika (ヨー＝マイカ, Yō-Maika) is the Grand Maester of Yevon and spiritual leader of Spira in Final Fantasy X.

Mika first appears in Luca, where he is celebrating his 50th year as Grand Maester by attending the Blitzball tournament. It is here that he also introduces Seymour Guado, the newly appointed Maester who has succeeded his father Jyscal following his death.

After the battle with Seymour, Mika places Yuna and her Guardians on trial for his murder. It becomes clear that there is a very deep conspiracy surrounding Bevelle and Yevon. Mika is revealed to be an Unsent, claiming that even in death, his leadership is invaluable.

As Yuna and her friends dig deeper into this web of lies, Mika reveals the truth that Sin cannot be destroyed and the teachings claiming that atonement for the crimes committed during the Machina War can defeat it are false. Only the hope that Summoners bring when Calming Sin is what keeps Spira going.

Later, when he learns that the party have destroyed Yunalesca and the only means of producing a brief Calm is gone, Mika descends into despair and departs into the Via Infinito, leaving Spira to its destruction with no intent to witness it.

Mika's unsent status is hinted during his and Seymour's debut scene. When Tidus learns he has been Grand Maester for half a century, he asks "Shouldn't he be retired now?", much to the annoyance of Wakka.

When Yuna encounters Mika years later in the Via Infinito, he had became the Fiend Concherer.