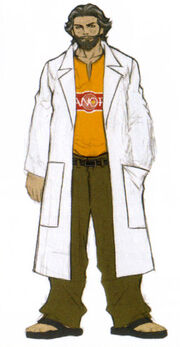 Dr. Hollander was a scientist formally employed by the Shinra Electric Power Company and appeared in Crisis Core -Final Fantasy VII-. He was the chief scientist in the Project G branch of the Jenova Project. He holds a grudge against Professor Hojo, due to the power struggle for the leadership of the science department that cost Hollander his job. Despite being Hojo's rival, Hollander is just as ruthless in his experiments and proud of his monstrous creations. Hollander is voiced by Shinya Ohwada in Japanese and by Sterling Young in English.

While Hojo worked on Project S, Dr. Hollander worked on the rival "Project Gillian" in Banora Village. His main test subject was Gillian Hewley, who was injected with Jenova's genetic material. Gillian's son, Angeal Hewley was born permeated in Jenova's cells, and would become what Hollander considered his "perfect creation". Genesis Rhapsodos was also a test subject, but he was considered a failure by Hollander.

After losing the power struggle, he went into hiding, and seemed to be plotting vengeance against Shinra. He sides with Genesis, who was suffering from degradation - a result of his failed creation. Hollander promised to cure the degradation, and together they both began a massive revolt against Shinra.

The SOLDIERs First Class, Zack Fair and Sephiroth both joined work together under Shinra to defeat the Genesis Army. They head to the Sector 5 Reactor on a hunch that Hollander might be hiding there. Both make their way through the legions of Angeal Copies, and make their way to Hollander's secret laboratory. Hollander enters to find that both Zack and Sephiroth are in his study. Once questioning who will stop Genesis' and Angeal's deterioration, Genesis floats down and explains that he will not hand off Hollander. Finding the right moment, Hollander runs out of his study, the first of many times Dr. Hollander will be forced to run away. Zack is hot on his tail. After being chased, they finally end up on the top of a building. Before Zack is able to take hold of him, the Buster Sword blocks his path, thus granting Hollander the chance to escape to safety.

Hollander and Genesis both head to Modeoheim, where they have a secret base. But Genesis grows inpatient with Hollander's lack of results. Zack follows them there and breaks into the underground level finding Genesis confronting Hollander, ready to kill the worthless scientist. Hollander explains to Genesis that without him, nobody can stop his deterioration. However, Genesis replies that "Jenova Cells" are the key to stop it, with Zack managing to keep Genesis from not harming Hollander, but he makes a dash for the exit, only be be stopped by the Shinra MP Cloud Strife. Unfortunately Cloud is knocked down by Hollander, and so Zack jumps back to shield Hollander, as well as trying to stop him from escaping. Stating the facts, he explains to Genesis that going to Hojo may not give him any idea where the Jenova Cells are stored. Genesis does not care, and so begins his duel with Zack, and allowing Hollander to run out of the warehouse.

It would turn out that he had hidden in a Hot Bath Inn. Only when Angeal attempts to kill Zack, he steps out with much pride, wanting his greatest creation to triumph. On the other hand, Angeal shouts at Hollander that his father is dead. Hollander, still confident, accepts this and tells him to do it on his mother's behalf. When Angeal explains that his mother was ashamed by her past, and so ended her own life, Hollander begins to tell the sordid details of Project G. When Angeal is killed by Zack, Dr. Hollander is taken in custody by Shinra.

Hollander resurfaces in Junon. As he comes out of one of the buildings during an attack by the resurfaced Genesis Army, Zack Fair spots him and chases after him whilst at the same time defeating wave after wave of Genesis clones. After defeating a stolen Shinra machine, Zack is quick to see Dr. Hollander attempting to open a gate. As he dashes towards him, Hollander manages to open it and runs off. Zack is once again held up by another one of Hollander's stolen Shinra machines. After talking with Tseng, Zack finds Hollander opening the gate to the Junon airstrip, and so chases after him once more. As soon as he makes it through, Hollander releases a giant stolen Shinra machine onto Zack, the Guard Scorpion. After a tough battle, he chases Hollander onto the edge of the airstrip. As Hollander looks down at the height of the fall, he grins and asks what will Zack do now as he falls back. As Zack stands with a surprised look on his face, two Genesis clones fly up from where Hollander fell, holding onto Hollander, into the sunset.

Four years later, at Gongaga, Zack tries to return home after being a part of Hojo's newest experiment in Nibelheim. Suddenly he is surrounded by Genesis Clones. After defeating two of them, he hears a familiar voice. Suddenly, Hollander floats down from the sky, with a small black wing sprouting from his back, and Genesis soon after. His hair has turned white through deterioration, and his clothes are tattered also. He explains to the clones that Zack's cells will be most helpful to them. He then explains that the cell structures have already started to deteriorate. Zack, surprised, asks him if he used the cells. Hollander replies, answering that he had injected himself with Genesis' cells, since Genesis was trying to kill him. Because of this, Hollander is now dying along with Genesis, but he does not regret the desperate action.

As he ends, Genesis questions Zack that he escaped from Shinra Mansion with another. He also adds that they were an Ex-SOLDIER, and a regular soldier. Instantly, Hollander explains that the regular soldier is the one who holds the last of the Jenova Cells before flying off with all of the other Genesis Clones.

When Zack eventually finds Cloud, who at this time is suffering from Mako Poisoning, Dr. Hollander is fast approaching. Suddenly, Lazard Deusericus flies down and attempts to wrestle Hollander away from Cloud, but is knocked down. Now seeing that he is gravely in danger he attempts to run away, but this time he is cut down by Zack and finally killed. With his last breath, he attempts to attack Zack, but falls to the floor dead. Hollander's final escape attempt ends in a final defeat.

Hollander is fought at the abandoned mako reactor in Gongaga. He is rather hard to defeat because he constantly heals himself, calls forth enemies, and often poisons Zack during the battle.