The Sister Ray was originally installed in Junon, some time before the start of Final Fantasy VII. In Crisis Core -Final Fantasy VII-, it appears in a flashback as a virtual battle ground between Sephiroth, Angeal Hewley, and Genesis Rhapsodos. The battle is intense enough that most of the cannon is sliced off into the sea. This is just a simulation, so no actual damage is done to the Sister Ray.

In Final Fantasy VII it can be seen as the party first travels through the city. It is a cannon of such great power that Shinra has no need to fire it until after the emergence of Weapon following Sephiroth's summon of Meteor. When Tifa and Barret are kidnapped by Shinra to be used as a scapegoat for the crisis the Planet was embroiled in, Tifa is thrown into a gas chamber to be executed. However, these plans are ruined when the Sapphire Weapon charges at Junon from the sea. The first ever firing of the cannon misses its target, and the Weapon's counter-attack blasts a hole in the fortress' armor. The Weapon charges a second blast, but the second firing of the Sister Ray at point-blank range destroys it. Tifa escapes her gas chamber execution cell through the hole Weapon blasted and runs onto the barrel of the cannon. After a brief slap-fight with the Shinra executive Scarlet, Tifa escapes onto the Highwind.

After the near-disaster at Junon, the Sister Ray is moved to the capital city of Midgar. At Midgar its power is boosted by the combined charging power of the city's entire electrical power grid; the Mako Reactors around the city were hooked up the cannon, creating a Weapon of incredible power. Specially designed to destroy the force field around Sephiroth's base at the Northern Crater, President Rufus Shinra puts the hopes of the survival of the Planet - and his company - on the Sister Ray. However, it would only be fired once more.

A second Weapon appears out of the world's oceans, this time the Diamond Weapon; it comes out of the seas below the Forgotten Capital and makes a beeline for Midgar. Despite the attempts of the party to defeat it, the Weapon continues its advance towards Midgar. Finally the Sister Ray is fired with such immense force that the windows of Shinra Headquarters shatter and parts of the cannon itself dislodge and fall to the ground. It destroys both the Weapon and Sephiroth's shield in a single blast.

But the Weapon fires out its own attack before being destroyed. The top floors of the Shinra Tower are shattered, seemingly killing Rufus in the attack. Afterward, Midgar descends into chaos; all order lost as various factions fight desperately for control. Professor Hojo comes out of the shadows and takes position at the controls of the Sister Ray. His plan was to fire the cannon one last time to give his son, Sephiroth, more power. This would overpower the systems and almost certainly destroy the cannon, possibly even Midgar itself, and he was warned not to. However, this plan was foiled when Hojo is killed by the party.

The Sister Ray is destroyed along with most of the Midgar in the cataclysm of Meteor falling on the city. In an instant the massive and proud weapon is mangled into a barely-standing ruin. The ruins of the Sister Ray can be seen in Final Fantasy VII: Advent Children. In the opening movie of Dirge of Cerberus -Final Fantasy VII-, just before the destruction, Vincent Valentine spots Hojo once again at the controls of the cannon. Though he thinks it to be just an illusion, this foreshadows the events of the game, which will take place three years later. 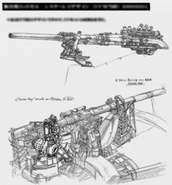