1st Class SOLDIERs have special privileges, as they are allowed to use personal items, clothing and equipment and are given the right to deny orders, assuming, of course, any responsibilities from their decisions.

Children around the Planet dream of joining SOLDIER and becoming 1st Class like the hero, Sephiroth. Cloud Strife, the hero of Final Fantasy VII claims to have been a member of SOLDIER inspired to join by Sephiroth. SOLDIER operatives are easily recognizable by the "strange glow" their eyes take.

Many 1st Class SOLDIERs have fan clubs based around them created by Shinra to increase the popularity of the organization and as a propaganda tool. 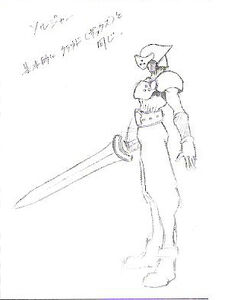 "Shin-Ra had a special group of warriors called SOLDIER. And all of the SOLDIERs had Jenova Cells put inside of them."
—Marlene, in the prologue to Advent Children

Approximately 30 years before the beginning of Final Fantasy VII, the Jenova Project was initiated to make a human-Cetra hybrid using the cells from Jenova (mistaken to be a Cetra) and Mako Energy from the Planet. The result of this experiment was Sephiroth, a child with exceptional abilities. Shinra recognized the potential of such a powerful warrior, so a method was planned to begin a mass production of more fighters of his type.

Using similar processes, Shinra began exposing promising warriors to raw Mako (giving their eyes that unique "glow"). Despite Cloud's dream of becoming a SOLDIER First Class, he lacked the mental strength to make it through the Mako Infusion, so he never did join the organization. Although still eclipsed by Sephiroth's strength and power, these new warriors called SOLDIER were given powers far beyond those of a normal combatant. They were sent on the more dangerous or important missions, had access to more equipment and information, and were higher ranked than other members of the army. These forces would be used to great effectiveness during the Wutai War.

During the battles with the first AVALANCHE in Before Crisis -Final Fantasy VII-, the data on SOLDIER operatives are stolen. Fuhito, expanding on the SOLDIER idea creates his own brand of super soldiers, the Ravens. These forces are completely without wills; they are only mindless killing machines. Using the SOLDIER data, AVALANCHE is able to predict SOLDIER movements, and capture several members to transform into Ravens. The SOLDIER force never successfully defeats AVALANCHE, with most of the battles fought by the Turks.

Headed by the SOLDIER Union Executive, Lazard Deusericus at the time of Crisis Core, SOLDIER acts from the Shinra Headquarters in Midgar, from floor 49 where there is a training room, briefing room, and lounge area for off-duty members. Most SOLDIER members seem to spend their standby time here, wandering and talking to each other. Materia synthesis seems to be closely related to SOLDIER, as the room where it is made from crystallized MAKO Stones is also on the SOLDIER Floor.

However, many Second and Third Class SOLDIER's suddenly disappeared along with First Class SOLDIER Genesis Rhapsodos. Shortly after the desertion, Angeal Hewley, also product of the Jenova Project like Sephiroth and Genesis, leaves the organization. Angeal was the emotional heart of SOLDIER, acting as a mentor to the younger SOLDIERs and inspiring them to always hold on to their "SOLDIER honor". Once these two were gone, Zack, who was Angeal's protégé, was promoted to First Class and takes up Angeal's role as heart of SOLDIER, using many of his same lines. Later Lazard defects to join with Genesis, causing great chaos across the Planet. Zack and Sephiroth are sent to Nibelheim to fix the Reactor there. During the mission, a series of events result in Sephiroth denouncing his humanity, and destroying the entire town. After Zack is defeated by Sephiroth, a young Shinra Guard, Cloud Strife defeats him. Zack and Cloud are taken by Professor Hojo as test subjects in the next round experiments in the Jenova Project. Though Zack later escapes, taking a Mako poisoned Cloud with him, he is gunned down by the Shinra army just before reaching his destination, Midgar.

The Fall of SOLDIERSửa đổi

In Final Fantasy VII, while SOLDIER itself plays an important role in the story, actual members of SOLDIER are few and far between. This could possibly be attributed to the loss of personnel after the mass desertion, the disappearance of the Director of SOLDIER, and the loss of SOLDIER's three most prominent members (Genesis, Angeal, and Sephiroth). The appearances of SOLDIER members in the game are limited to enemies encountered during random battles and include SOLDIER 3rd Class members guarding the Shinra Science Department area on floors 68 and 69 of the Shinra Building, 2nd Class members that are stationed in Junon after Meteor is summoned, and SOLDIER 1st Class members guarding the Mako Cannon in Midgar. Cloud claims to have been a member, but this is a false memory created by the physiological damage Hojo's horrible experiments caused him as well as the trauma he experienced from the destruction of his hometown, and the death of his best friend, Zack. Even though Cloud was never a member of SOLDIER, he becomes strong enough in Final Fantasy VII to be mistaken for a 1st Class member. Because of the experiments, Cloud's eyes have the "glow" that makes people believe that he was a former member. After Shinra collapses, SOLDIER seems to have fallen with it. However, during the events of Dirge of Cerberus -Final Fantasy VII-, Vincent encounters remnants of SOLDIER hiding out in the Shinra Mansion and in the ruins of Midgar.

SOLDIER members are equipped with a set of combat fatigues colored to distinguish rank, though the highest ranking heroes of SOLDIER seem to forgo this formality. When shown in newer, better graphics, it can be seen that these are composed of sleeveless turtle-neck sweaters and baggy pants, with leather accents that hold on their armor in place and their weapon when its not in use. In Final Fantasy VII they were colored blue for Third Class, red for Second Class, and purple for First Class. They also wear body armor on the chest, head, and shoulders, and wield wide two-handed swords, along with several types of Materia and extra weapons, depending on class.

In Crisis Core -Final Fantasy VII-, SOLDIER members were given slightly different uniforms. 1st Class wore black uniforms traditionally (although Genesis and Sephiroth do not follow this), and do not seem to wear the helmets that other SOLDIER members wear. Unlike 2nd and 3rd Class, 1st Class SOLDIER members are given the privilege to choose whether or not to wear their own clothes instead of standard 1st Class uniforms. 2nd Class wears a purple uniform, and 3rd Class wears light blue uniforms. Their chest armor has also disappeared, and the only torso covering they have over their sleeveless turtle-necks is a leather belt-like wrapping with the SOLDIER logo embedded on the front that covers the lower stomach. However, Zack Fair wore neither red nor purple as a SOLDIER 2nd Class, but rather a dark blue, nor did he wear a helmet (though most likely to distinguish him from other SOLDIER members). Another distinctive mark is the "SOLDIER Sword", a simple longsword with a curved guard, with a small SOLDIER logo engraved in the middle. It is the default weapon for 3rd and 2nd Class members, as well as 1st Class, however most known 1st Classes often use their own swords. 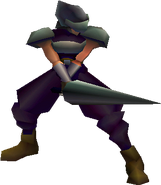 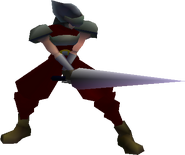 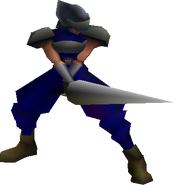 Third Class SOLDIERs are armed with a flying sickle, which they employ in combat. They are also equipped with Sleep materia, and level 2 Bolt and Ice materia.

Second Class SOLDIERs use no materia, but employ a technique known as the Sword of Doom, which combines a physical attack with a Braver-like move.

First Class SOLDIERs also employ the Sword of Doom technique, and are equipped with Silence materia.

It is likely that SOLDIER equipment also depends on the situation. According to Crisis Core, it appears that SOLDIER members acquire Materia on missions, and get new equipment from the company itself, through a hatch on the SOLDIER Floor.

1st Class privileges, however, informally include – the use of personal equipment, the use of rationed supplies outside of missions, and the right to veto orders. This is most obviously shown with Sephiroth's choice of clothing, Masamune sword, and advanced abilities. 1st Class SOLDIER members also have the option of fusing their Materia to use more powerful magic and abilities.

Deepground was a top-secret branch of SOLDIER. Their existence was known only to President Shinra himself, as well as executives Scarlet, Heidegger, and Professor Hojo. The program was carried out beneath the streets of Midgar, in the secretive Mako Reactor 0.

In contrast to the normal SOLDIER program, different Deepground soldiers are subjected to different experiments for their creation, rather than the set procedure that produces normal SOLDIERs. Their attire is also different, bearing the original SOLDIER logo from Final Fantasy VII, even though in all subsequent pieces of the Compilation, the Crisis Core SOLDIER logo is used. Why Deepground uses the original instead is unknown.

Final Fantasy VII Ultimania Omega[1] reveals details of the early ideas the development team had for SOLDIER. SOLDIER were originally intended as warriors bathed in mako energy who could use magic. In the early drafts SOLDIER was used to suppress oppression against the construction of mako reactors. The Ultimania reveals that in the original history of the Planet, there was a war between two nations, which dragged on due to the countries being equally strong, which was when SOLDIER was formed.

Ultimania goes further to shed some light in the tough screening program for SOLDIER: selected from the army or civilian population, the candidates had to undergo many examinations. Finally, at the training facility, in addition to training, the candidates were also exposed to mako energy and only a handful of them managed to graduate to SOLDIER. Many became physically and mentally ill and dropped out, but the fact was dealt with in secret, by disguising the loss in an extraordinary number of accidental deaths and suicides. Some people, though, managed to escape.

The SOLDIER operatives who were sent to the war were an elite few, and the guerrilla warfare shifted the advantage to the nation on Shinra’s side. SOLDIER's activities were broadcast in detail and the people began to view SOLDIER as heroes. After the war SOLDIER turned towards "maintaining the peace", which included the suppression of rebel elements. At this time people began viewing the government as good as worthless; they trusted only Shinra to protect them. And this was how the government fell under Shinra’s power.

Also, exposure to mako energy had more visible symptoms in the early story drafts: Those bathed in mako would gain superhuman strength, and their dormant "Jenova" element would become easier to awaken; however, as the energy would run out the subject would suffer various mental damage, such as rapid weakness, anxiety, fear, and loneliness. Shinra was well aware of mako's addictiveness, and that overexposure would turn people into monsters, yet the company would continue its practice to infuse SOLDIER members with mako.

Many of these original ideas were not used in the game.