The Ronso are a race of muscular, anthropomorphic feline humanoids from the world of Spira in Final Fantasy X and Final Fantasy X-2. The Ronso tribe lives at the base of Mt. Gagazet and guard the sacred mountain fiercely. They are formidable warriors, well known for their strong sense of honor and loyalty, as well as their pride and quickness to anger.

In Final Fantasy X, once Yuna and her Guardians arrived at Mt. Gagazet on their way to Zanarkand, Maester Kelk Ronso and the Ronso tribe blocked their path until they were convinced of Yuna's conviction, then they allowed the group to pass and swore to guard the gate from the Guado who sought to apprehend the group for treason. The Ronso underestimated Seymour Guado's power, however, and many Ronso were killed in their attempt to stall him from going after Yuna.

After the defeat of Sin, the deconstruction of Yevon, and the onset of the Eternal Calm the few remaining Ronso youth fostered a deep hatred of the Guado for what Seymour Guado had done and one Ronso in particular; Garik Ronso, openly sought revenge against the wishes of the new Elder, Kimahri.
Garik was thwarted in his plans of rebellion by the Gullwings when he climbed the mountain to receive guidance. Confused and angry, Garik demanded for Kimahri to tell the Ronso what path there was for the tribe; but Kimahri had no answer, and as a result Garik rejected him as their leader. But, through the example of young Ronso Lian and Ayde (who had traveled Spira in a vain attempt to fix Kimahri's horn), Kimahri saw that the Ronso had to travel and experience all of Spira to learn their path. And thus, after proving to Garik that violence was not always the answer, the Ronso elder decided that it was for each individual Ronso to decide their path to ensure the future of the tribe.

While they have been seen traveling across Spira, the Ronso village is located at the base of Mt. Gagazet. 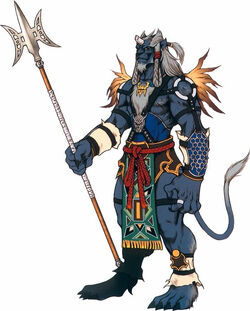 Ronso are humanoid in stature, standing above two meters in average height (with the males considerably larger and more muscular than the females, who possess a "faster", more athletic body type), they are extremely feline in appearance, possessing hands/claws and foot paws, they walk on (what would be for Humans) the balls of their feet and possess dew-claws as well as foot pads.
Possessing lion-like tails that roughly measure half of their body lengths, Ronso bodies are covered in blue fur (perhaps a trait due to their living in a winter climate) with patches of white (though the color has differed to either a darker blue or yellow depending on the individual) fur around the thighs, calves, shoulders, chest (males), tail-tips, and scalp. The abundance of the fur that these patches consist of seems to be greater on the males than the females, based on observation. The scalp fur, or mane, is usually tied back or styled in a similar way to hair.
In regards to facial appearances Ronso differ in comparison to humans, again they possess feline attributes like muzzles and fangs as well as a distinct cat-like nose. Their ears, while located similar to humans, possess a more elven shape and are thought to be capable of articulation similar to cats. The male Ronso possess a singular horn that grows from the forehead and denotes status and power, the females do not seem to posses this attribute. For the males, this horn is a symbol of their great strength and pride, and to lose the horn in battle is considered extremely shameful. Kimahri Ronso was one such Ronso who had been cast out due to its loss and his comparatively small stature next to his kin.
Both genders possess carnivore fangs, hinting that they may be meat eaters (it is unknown if they are omnivores). Their eyes are yellow, contrasting starkly against their fur, and constantly give the impression of a predator’s gaze.

During the events of Final Fantasy X Kelk Ronso was the current tribe leader of the Gagazet Ronso and was their representative in Bevelle as a Maester of Yevon. After his death at the hands of Seymour Guado, Kimahri took up the role as leader of the tribe.

A largely taciturn species, the Ronso give the impression of being slightly uncomfortable with human language as they speak in short, direct sentences with rough grammar. They also habitually refer to themselves in third person. Another notable lingual trend is in their names, with the first name being their own and the second being "Ronso" to denote species. The Guado race also possesses this habit.