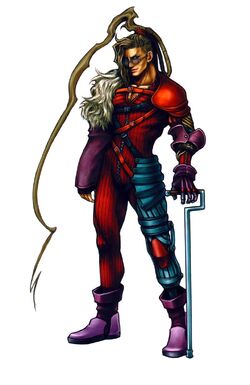 At the time of Operation Mi'ihen, Nooj, Gippal, and Baralai, along with their mission recorder Paine, entered the Den of Woe as their final test to become members of the Crimson Squad. While in the cave, Shuyin took Nooj as a host, using his eagerness to die to control him. After escaping the Yevon Warrior Monks, the team disbands at Mi'ihen Highroad and Shuyin forces Nooj to shoot his teammates in the back. Nooj dedicates his life to discovering the secrets hidden by Yevon after seeing a vision of Vegnagun in the Den, though he was unaware of Shuyin's presence in his body.

Two years later, YRP first encounters Nooj at Kilika, where he and the Youth League are demanding that a certain sphere should be released to the public. Due to the current mission and the ensuing chaos, they have no time to meet Nooj face to face. Should the player decide to side with the Youth League, they are given a honorable welcome, and Nooj discusses the contents of the sphere. The sphere contains images of Vegnagun, a massive Machina weapon that Shuyin has been manipulating him to find, unknown to him.

Thanks to cooperation with Leblanc, Vegnagun's location is revealed to be under Bevelle, and Nooj heads there to find Vegnagun. However before he could do anything Vegnagun fled to the Farplane, scared off by Nooj's hatred. He meets up with Baralai and Gippal under Bevelle, to discuss the issue, but because of Nooj's betrayal two years ago, Baralai becomes angered and threatens to kill Nooj. This in turn triggers Gippal's frustration and he threatens Baralai. This stream of negative emotions fully reawakens Shuyin, who decides to take Baralai as his new host. Shuyin who is now fully in control of Baralai, then jumps into the Farplane, and Nooj and Gippal pursue.

The three are not seen for a while until Yuna falls into the Farplane after defeating the Aeon Ixion, where Nooj and Gippal hand her spheres for Paine. Once again they vanish until the near end of the game, when Shuyin has control of Vegnagun. Nooj hatches a plan to shoot Baralai so Shuyin will take him over, where he will then die. Yuna, who is against losing any comrades again, rejects his plan. In the end, they all work together to defeat Vegnagun and free Baralai. Nooj and Baralai disband both New Yevon and the Youth League to help lead Spira together, friends once again.

Nooj, along with many other characters such as Baralai and Gippal, are obtainable party members in the International version. He can be obtained in Mushroom Rock with an SP sphere during chapter 5 after clearing the Den of Woe. Skipping the cut scenes in the Den will prevent you from obtaining him however.

In Chapter 5, if the player obtains all the Crimson Spheres and heads to the Den of Woe, they can enter a series of several battles. A Pyrefly illusion of Nooj is the last boss encountered in the Den of Woe. Nooj uses a gun in battle and has two special gun skills and a Limit like special attack. The first skill creates a glyph under the player and explodes, causing damage. The second skill is named Greedy Aura, and it creates the same glyph under all allies, but causes less damage and also MP loss. His most powerful attack is called Lightfall, where (when low on HP) he levitates into the air and creates a giant ball of light and then proceeds to hurl it down upon all allies, always causing 5,000 points of HP damage.