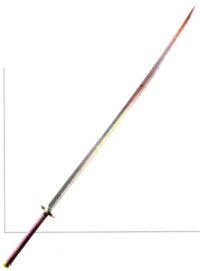 The Masamune is the mightiest sword in the game's original version, and it is the only weapon that can be used by all classes. It is found on the air floor of the last dungeon. It provides 56 Attack, 50 Accuracy, and 40 Critical.

The Masamune is the most powerful non-character-specific sword in the game and, until the 20th Anniversary Edition, the most powerful sword in the game overall. It can be obtained either in a treasure chest in a secret room in Pandaemonium, or as the top prize of the Toad-enhanced character portrait-matching minigame available while on board the Snowcraft. It provides 150 Attack, 90% Accuracy, and 4% Evade, and when used as an item, will casts Haste XI.

The Masamune can be found in Eureka, wherein it was the strongest regular dark-elemental sword. Kunoichi must be defeated in order to obtain it. It provides 132 Attack and +10 Agility.

The Masamune in [[Final Fantasy IV]].

The Masamune is Edge's ultimate weapon acquired by defeating the Ogopogo in the Lunar Subterrane. It has a sister sword named the Murasame. However, in the Game Boy Advance port, stronger swords can be obtained. In the non-DS versions, it provides 65 Attack and 49 Accuracy, while in the DS version, it provides 60 Attack, 120 Accuracy, +1 Strength, and +3 Speed. In all versions, when used as an item, it casts the Haste spell.

The Masamune is Edge's second strongest katana, with the Mutsonokami only slightly surpassing it in power.

The Masamune is one of the legendary Sealed Weapons acquired in the Sealed Castle. It is the sealed katana, and its user always goes first in battle. It provides 104 Attack, 107 Accuracy, and 15% chance for criticals.

Due to Ted Woolsey's creative translations, the Masamune was renamed the Aura in Final Fantasy VI until the Advance version's release. Although it is used by Cyan Garamonde, it is not his ultimate weapon, and several Masamunes can be obtained. It is automatically equipped on him after defeating Wrexsoul in Cyan's Soul. It can be stolen from Yojimbo and won from the Dragon's Neck Coliseum by betting the Murasame. It provides 162 Attack.

Masamune is easily recognizable due to its massive length but thin width, resembling a Nodachi. The design of the Tsuba (guard) and Tsuka (hilt) have varied. The exact length of the sword varies as well, usually at least as long as Sephiroth is tall or slightly longer, which would make it approximately six-to-eight feet long.

A replica of the Masamune can be acquired as an item in the Speed Square of the Gold Saucer, although it is simply an item, and does nothing.

The Masamune cannot be equipped in this game. It is one of Gilgamesh's weapons when he is summoned into battle, dealing heavy, non-elemental damage to all enemies.

The Masamune is a Thief Sword that can be equipped by Zidane. It is synthesized in the Black Mage Village after returning from Terra for 16,000 gil, a Zorlin Shape and an Orihalcon. However, it is not his ultimate weapon. In Final Fantasy IX, Masamune appears as two katana connected at the hilt. It provides 62 Attack, teaches the ability Sacrifice, and inflicts Doom when used with the Soul Blade skill.

The Masamune is Auron's Celestial Weapon found in Mushroom Rock, and requires the Mars Crest and Mars Sigil to activate. Unlike other versions, it resembles a Western sword far more than a Japanese blade. Fully upgraded, the Masamune has the abilities Break Damage Limit, Triple Overdrive, First Strike and Counter-Attack. The Masamune also deals more damage the lower Auron's HP is.

Auron's Celestial Weapon reappears in Final Fantasy X-2 as the weapon wielded by Rikku when she is wearing the Dark Knight Dressphere.

Available to players since June 2010 as one of the new Abyssea expansion's Empyrean Weapons, the Masamune is the Great Katana class Empyrean Weapon, and therefore only used by Samurai. As with other Empyrean Weapons, only Masamune's base version is currently available to players, with no visible statistics besides its hefty DMG and Delay ratio. The creation of Empyrean weapons utilizes the magian system of weapon upgrade, requiring players to amass dozens of rare drop items from powerful new High Notorious Monsters in the Abyssea zones. The level cap is expected to rise to Level 99 sometime in 2011, and with it, further, more complicated upgrades to the Masamune will continue to be released, slowly unveiling new statistics and capabilities unique to the weapon.

The Masamune is the ultimate katana acquired by defeating Gilgamesh and receiving the hunt reward. To equip it, a character must have obtained the Masamune license for 155 LP. The Masamune is also available for purchase in the bazaar, where it is known as the "Master-Crafted Blade". It is obtained by selling two Gemsteels, three Orichalcums, and two Mallets, and is purchased for 350,000 gil.

The Masamune is found in Lhusu Mines in the area where Gilgamesh is encountered for the second time; it is possible to acquire it while still fighting him. It is not available in the bazaar. The Masamune can only be equipped to the Mononofu job class.

The Masamune has a slightly stronger version called Masamune I ( マサムネ I ) that is identical to the Masamune in appearance but is a 1H sword instead of a katana. The Masamune I will be available for purchase in the bazaar by selling the two Gemsteels, three Orichalcums, and two Mallets.

The Masamune is a saber wielded by Yaag Rosch. It cannot be obtained by the player, and is notably shorter than the weapon's other incarnations in the series, resembling a defensive wakizashi with an American Civil War saber-style hilt and sheath.

The Masamune is once again wielded by one of the game's antagonists, Marquis Messam Elmdore, and must be stolen from him. It may also be thrown by high-level enemy Ninjas. In the remake, Elmdore has the Safeguard ability, preventing his equipment from being stolen. However, the sword can still be stolen from a Samurai working for Celebrant Bremondt Freitberg, and is thrown by high-level Ninjas.

It provides 18 Attack, 15% evasion and as mentioned above, cannot be bought.

The Masamune is a standard weapon wielded by Ninjas and Assassins. It teaches Oblivion to both classes. A more powerful version of the Masamune, called a Masamune 100, is available after completion of the storyline. It does not teach any skill.

The Masamune is a weapon wielded by Ninjas, Parivirs, Assassins, Chocobo Knights, and the Heritor. It teaches Oblivion to both Ninjas and Assassins. The Masamune 100 returns as Hyakushiki-Masamune, which teaches Adelle's Heritor class the skill Elpe.

The Masamune is an artifact that boosts its possessor's Strength stat by 5, making it one of the most powerful Strength-boosting artifacts. It can be obtained by defeating the Iron Giant at Mount Kilanda, cycle 3 or later.

The Masamune is one of the strongest weapons for Clavats. It raises the players ATK by 160. The description for the sword reads "Marvelous sword born of a skilled swordsman, eerily reminiscent of a rich, faroff history." The scroll used to make this is called Foreign Weapon.

The Masamune is a MAGI. When used in battle, it hits for roughly 500 damage and ignores Defense.

The Masamune is Sephiroth's weapon of choice, as seen in Final Fantasy VII. The Masamune Blade and the Masamune also appear as equippable weapons exclusive to him. Sephiroth does have a more powerful exclusive weapon though, the One Winged Angel. Both weapons give the following stats:

Although the Masamune is a weapon in the Final Fantasy series, it is arguably more notable as a broadsword in the Chrono series, in which it contributes a major part to the story. Oddly enough, the Masamune in Chrono Trigger was not intended to be the Masamune, and was called the Grandleon in the Japanese version.

In Chrono Trigger, the Masamune is a sword used by Frog, and it is said to be a legendary weapon capable of defeating Magus. It was forged in 12,000 BC by the swordsmith Melchior out of Dreamstone, and was dubbed the Ruby Knife. However, during the Ocean Palace disaster when the Ruby Knife was used to destroy the machine, it was transformed into the Masamune. The sword was later broken during a fight between Cyrus and Magus. The pieces were watched over by the spirits Masa and Mune. Crono, Marle, and Lucca came across the broken sword, and had it repaired. Frog wielded it and used it to defeat Magus. The sword's power grew more powerful after Frog visited his mentor, Cyrus' grave.

The Masamune as seen in Chrono Cross.

In Chrono Cross, set after the events in Chrono Trigger, the sword was stolen and became possessed by an evil spirit. Those who wielded it became possessed as well. Radius used the sword to kill his friend Garai, and Karsh had to finish off Dario who was possessed by it. It was later seen at the entrance to the Dead Sea. Only the Einlanzer could break its seal temporarily, but only when a new master, Serge, overpowered it could it be free of evil forever. It was reborn as the Mastermune, and became a weapon for Serge. The Mastermune has the unique attribute of dealing critical hits with nearly every blow, making it arguably the most powerful weapon in the game despite it not having the highest Attack stat.

The Masamune is the Level Six incarnation of the Mana Sword.

In Kingdom Hearts and Kingdom Hearts II, two keyblades, the One Winged Angel and the Guardian Soul, are modeled after Sephiroth and Auron's respective versions of the Masamune.

The Masamune is named after Masamune Okazaki, the legendary Japanese blacksmith, considered the greatest in history. It is often compared to the Muramasa, though always the better of the two. According to legend, Masamunes are marks of an internal peaceful and calm warrior, the exact opposite of Muramasas.

There exists a replica of Sephiroth's sword, also named the Masamune. It was revealed to be nearly six feet in length.

Masamune used by the Gilgamesh Esper in Final Fantasy VI.

The Masamune attack used by Gilgamesh in Final Fantasy VIII.