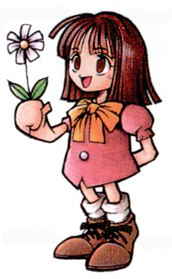 "Sadness was the price to see it end. It's been two years since they told me that."
—Marlene in the prologue to Advent Children

Marlene is actually the daughter of Dyne and Eleanor, friends of Barret's. Barret had taken Marlene in as his own daughter after his friend Dyne, his hometown Corel, and loved ones were destroyed by Shinra troops. As Marlene was less than a year old when her town was burned to the ground and her mother was killed, she has no memory of her biological parents.

In the storyline of the game, Marlene is four years old. She takes it upon herself to care for Tifa Lockhart's 7th Heaven bar when Tifa joins Cloud Strife and Barret on an AVALANCHE mission.

The game follows to a point where another of the lead characters, Aeris Gainsborough, gives herself to the Turks in exchange for Marlene's safety. She is later left with Elmyra, Aeris' adoptive mother, and is later still held ransom by the Shinra spy Cait Sith to force Cloud to cooperate with him on their journey to the Temple of the Ancients. She also appears one last time at the end of the game, sensing Aeris' presence just before the Lifestream emerges to aid in the conflict between Holy and Meteor.

Marlene also appears in the CG film Final Fantasy VII: Advent Children as a major character, now six years old. Unlike many of the other children in the film, she is unaffected by Geostigma. It can be noticed that in the film she is wearing her hair similar to the way Aerith wore hers.

Her role in the film is fairly large. She recounts the story of Sephiroth and the events of Final Fantasy VII to the viewer. She is close to Denzel, caring for him when he is afflicted by Geostigma. She goes with Tifa to Aerith's church to look for Cloud, and is subsequently abducted by Loz and taken, with the other children, to the Ancient City. There, she witnesses Kadaj's manipulation of the Geostigmatic children, including Denzel, and is forced to watch as Cloud takes on Kadaj, Loz, and Yazoo. By the end, she is safely back in Edge with Denzel. In the last scene she is seen holding Barret's hand, symbolizing that their bond is still strong.

In Advent Children Complete, Marlene's role is fairly expanded upon. After Loz takes her to the Forgotten Capital, she attempts to escape but Kadaj takes down a tree and blocks her off. When Cloud takes her back to 7th Heaven, they talk about why Cloud left, which according to her was either because he failed to find a cure for Denzel's Geostigma or because he got the stigma as well. After Cloud replies that he could not care for himself let alone anyone else, Marlene impersonates Barret and tells Cloud not to give up. She also travels with Denzel and the other children of Edge after Aerith calls him on the bar upper floor's phone telling everyone to go to her church.

Nomura has said of Marlene that due to her time with Tifa, she has essentially been taken under her wing and is a "mini-Tifa" in personality, but also shares a physical similarity to Aerith and could sense her presence near the climax of the film, giving her aspects of both women in her character.

Marlene was originally supposed to be Barret's biological daughter and not Dyne's. Barret would have saved her from the Corel disaster in the past.