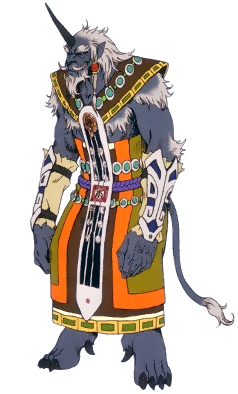 Kelk Ronso (ケルク＝ロンゾ, Keruku-Ronzo) was the leader of the Ronso, and a maester of Yevon in Final Fantasy X. Unlike most Ronso, Kelk appears to speak normal English, as opposed to the Ronso's simple speech pattern. Since he was a Maester of Yevon, Kelk most likely grew up in the Bevelle area in order to learn his duties as Maester. This could explain his human-like speech and sophisticated air.

Kelk was in charge of administering Spira's judicial system and put Yuna and her Guardians on trial for the murder of Maester Seymour. However, he was the only one who was not aware that Seymour had killed his father Jyscal, and it troubled him greatly after he discovered this. Following the sentence of the Summoner Yuna, Kelk had enough with the hidden secrets and betrayals of Yevon. He returned to Mt. Gagazet hoping to find honesty and order in his mountain home. When Yuna and her party reached the Mountain Gate, Kelk denied them passage up the sacred mountain because of their unusual interactions with the Al Bhed and Yevon. After realizing that Yuna was still willing to sacrifice herself for the good of Spira, even after turning her back on Yevon, he let them pass.

Shortly after, Seymour came up the mountain, intent on continuing his mission to become Sin. Maester Kelk had promised Yuna and the guardians that he and the Ronso would bar the path of any intruders wishing them harm. Naturally, Seymour was prevented passage, which angered him, causing him to slay every Ronso in his path, including the just Maester Kelk.

Maester Kelk is the only maester never seen or mentioned in Final Fantasy X-2. Seymour had previously died and remains on the Farplane. Kinoc, Mika, and Jyscal are seen and fought in the Via Infinito dungeon.