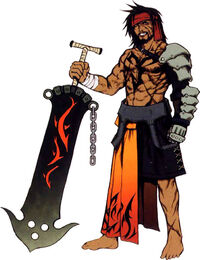 "I ain't gettin' any younger, so I might as well make myself useful."
—Jecht

Jecht (ジェクト, Jekuto) is a non-player character and a major antagonist in Final Fantasy X. He is Tidus's father; High Summoner Braska's legendary Guardian, as well as being a major blitzball star in his hometown of Zanarkand. Jecht is a tall, muscular man with a tendency to drink heavily, and wields a large black sword in battle.

Jecht's body forms the core of Sin's current incarnation, as he was the most recent Final Aeon to defeat Sin ten years prior to the game. In person, Jecht only appears in flashbacks and at the very end of the game, but as Sin, he appears frequently to attack the party and release monsters to fight them.

Jecht's voice is provided by Masuo Amada in Japanese, and Gregg Berger in English (where Jecht is pronounced [ʤɛkt]).

On the surface, Jecht is a surly and arrogant man. He frequently refers to himself as "the great Jecht" (Jecht-san in the Japanese releases), and declares himself the best blitzball player there is. As a blitzball star he loves fame and glamour, and asks Braska several times if there will be any celebratory events on their pilgrimage. Eventually his career hit a slump when Jecht began drinking, and it was rumored he was going to retire, though he was quick to deny this and claim he could quit drinking if he chose. Jecht was also verbally abusive to Tidus, giving him the nickname "crybaby" and otherwise brushing him off or berating him.

Despite his numerous flaws, at heart Jecht is a good man. He criticizes Tidus frequently, but does so in the hope his criticisms will encourage Tidus to try harder and disprove him. Jecht does love Tidus, but has trouble expressing it: a sentimental message to Tidus on a sphere is cut off with Jecht mumbling "Remember, you're my son. And...well, uh...never mind. I'm no good at these things." When the party reaches Zanarkand, a flashback shows Jecht telling Braska and Auron his dream is to train Tidus into a star blitzball player like him. When Tidus confronts Jecht at the game's end, his first words to Tidus are to accuse him of being "all bones" and question his diet, but immediately after he compliments Tidus on how much he has grown.

Beyond Tidus, Jecht is generally good-natured. He enjoys the Hymn of the Fayth, and it is the people of Spira singing the tune that calms Sin enough for Tidus and his comrades to enter the beast and find Jecht at its core. He is also well-loved by his fans, to the point a blitzball tournament in Zanarkand is named in his honor after he disappears. Perhaps the best example of Jecht's benevolence is his decision to sacrifice himself to become the Final Aeon, choosing to give up his life and any chance to return home in favor of defeating Sin, and hopefully one day finding a way to defeat it for good.

Jecht came to Spira from a magically-summoned replica of Zanarkand, created from the memories of those who lived in the original and maintained by Yu Yevon, the Summoner who was Zanarkand's leader a thousand years before the events of Final Fantasy X. Jecht became a star blitzball player, perfecting his own technique, the "Sublimely Magnificent Jecht Shot Mark III," otherwise known as the Jecht Shot.

In the present, Jecht's son, Tidus, claims he hates his father for putting him and his mother through hard times, and because he was left under a lot of pressure to live up to Jecht's fame. Whenever Jecht was around, according to Tidus, his mother constantly ignored him to spend time with her husband. Jecht disappeared one day while training out at sea, where he came in contact with Sin resting in the waters. Sin pulled Jecht out of the dream and transported him into present-day Spira, where he was seen as a crazy drunkard and locked up in Bevelle.

Soon after his imprisonment, Braska visited Jecht and requested he become his Guardians along with Auron - a Bevelle warrior monk who had fallen from grace. Auron objected to Jecht being a Guardian but Braska thought it the perfect irony for three of the most unlikely people to defeat Sin; a drunken blitzball player from Zanarkand, a summoner with a "heathen" Al Bhed wife and a "half-breed" daughter (namely Yuna), and a disgraced warrior monk. Before they departed, Jecht told Yuna numerous stories about his Zanarkand; because of this, she is the only one of the playable characters (aside from Rikku and Auron himself) who is not skeptical of the idea that Tidus comes from Zanarkand ten years later. During the earlier parts of their journey, Jecht's tendency to drink sometimes got him into trouble, most notably when on the Moonflow when he once thought that a shoopuf was a giant Fiend and wounded it, forcing Braska to pay for the damage with all of his travel money. After this incident, however, Jecht gives up drinking anything stronger than shoopuf milk for fear that his family would be ashamed of him, and out of embarrassment for what he had forced Braska to do. Jecht also records their journey on the way to show his wife and Tidus, still hopeful he will find a way home some day.

Over the course of Braska's pilgrimage, Jecht matures as he learns about Spira and what became of Zanarkand. His own personal journey mirroring what Tidus would go through ten years later. According to Auron, Jecht would often suggest they help people along the way because it was "the right thing to do", which always led to trouble for the three. Jecht also eventually came to accept he was trapped in Spira with no hope to return to Zanarkand, and left behind spheres to help guide Tidus's journey in case Tidus befell the same fate he had.

By the time they reached Zanarkand, Jecht, Auron, and Braska had bonded and became close friends, and it was Jecht who offered to give up his life to become Braska's Final Aeon, knowing that he could never return home. As one last favor, Jecht asked Auron to look after Tidus, believing that Auron could find a way to Dream Zanarkand. Though Auron protests Jecht's choice, knowing Sin will eventually return, Jecht assures Auron he'll think of a way to stop Sin's continual reincarnations.

As the Final Aeon, Jecht defeated Sin, but the "spiral of death" surrounding Sin continued: Yu Yevon's spirit possessed the Final Aeon and transformed Jecht into the core of the new Sin, leaving Jecht's soul trapped within the creature for ten years. Unable to completely fight back against the powerful instincts Yu Yevon had instilled within Sin, the only times Jecht could operate of his own free will was for brief moments when he heard the Hymn of the Fayth. However, Jecht eventually managed to assert some control and make his way to Dream Zanarkand, where he communicated with the now-undead Auron and transported him and Tidus to Spira, hoping that Tidus would be able to find a way to destroy Sin for good where he had failed.

While in Spira, Tidus would reminisce about Jecht frequently, not suspecting the beast Sin was his father. When Auron reveals the truth to him, Tidus initially refuses to believe him. However, Tidus eventually senses Jecht within Sin, and with Auron's urgings realizes Jecht's desire is for Tidus to kill him and free him from being forced to destroy Spira. Tidus and his comrades are later stunned to find Sin complacently listening to the Hymn of the Fayth, the same song Jecht enjoyed as a human. Tidus accepts what he must do at this point, and promises Jecht he will find a way to end the cycle and free him.

Using the Fahrenheit to broadcast the Hymn across Spira, Tidus's group manages to bring all of Spira together in song, calming Sin momentarily. This allows them to fight their way through the beast's innards and confront Jecht at Sin's core. Able to speak to his son one final time, Jecht transforms into the Final Aeon, and is defeated by Tidus and his allies. Dying, Jecht and Tidus finally make peace, and Yuna uses her Aeons to weaken Yu Yevon's spirit making him vulnerable for the first time in a thousand years. The group then unleash an assault on him directly, destroying him and ending Spira's spiral of death.

Jecht first appears in a short flashback from the scholar Maechen during Chapter 5 at the Zanarkand Ruins. Jecht also has a small voice cameo in the final battles of Final Fantasy X-2 along with Braska and Auron, during which time they give Yuna encouraging words and advice on where to strike Vegnagun. Not surprisingly, as Shuyin resembles his son, he calls him a crybaby as well as one that needed a "good spanking".

Jecht himself is never fought nor is ever seen fighting. He is only fought in the form of Braska's Final Aeon, in Sin's Core.

Jecht has his own theme: "Jecht's Theme", (ジェクトのテーマ, Jekuto no Tēma). A laid-back melody with steel-stringed guitar solos following Western style, it is performed by Tsuyoshi Sekito. It appears in the original soundtrack as the second track of Disc 3.

The music that plays during the final confrontation against Braska's Final Aeon within Sin is "Otherworld", a heavy metal style song with English lyrics that is uncommon for a Final Fantasy game. Noticeably, the only other time the song plays is during Sin's attack on Dream Zanarkand in the opening FMV. 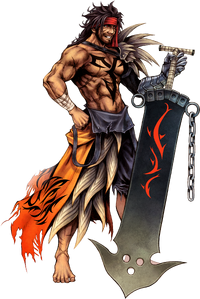 Chaos has summoned a combined force of Final Fantasy's ultimate villains in an attempt to gain control of a number of Crystals, gaining total control of the Final Fantasy worlds. Jecht is one of these villains and stands as the villain representing Final Fantasy X, opposing Tidus, his son.

Jecht has no true interest in serving Chaos, fighting only on the Emperor's word with the hope of attaining an unspecified dream involving his son. Jecht also confronts Tidus to offer him the chance to settle their grudge and prove himself. Later in the game, it is revealed that Jecht was a member of Cosmos's ranks during past conflicts between Cosmos and Chaos. His servitude to the God of Discord is simply another component of the Emperor's grand scheme to destroy Cosmos and end the war.