In Final Fantasy VIII, all forms of Gunblade consist of some sort of sword blade with some type of gun action built into the hilt, with its barrel running inside the length of the blade. They are mostly used like normal swords, but triggering a round sends a shockwave through the blade, creating a vibration as the weapon passes through an opponent to increase damage.

In Dissidia Final Fantasy, Squall Leonhart's use of the Revolver is refined beyond the normal slashes seen in Final Fantasy VIII, incorporating the use of the gunblade's recoil for a unique combat style. Using the Heel Crush and Rough Divide techniques, Squall triggers a round while holding the Gunblade behind him, the recoil quickly pushing him forward. Using the Solid Barrel and Beat Fang techniques, Squall thrusts the blade into the enemy, only to trigger a round (which also damages the enemy), the recoil of the shot pushes the blade back, where Squall immediately thrusts again, repeating the process several more times.

So far the combat styles demonstrated for Gunblades capable of projectile firing (as seen in Final Fantasy XIII and the Compilation of Final Fantasy VII) are simply alternating between ranged and melee combat with the favoured style depending on the Gunblade used. For example the Velvet Nightmare is more adept for ranged combat than melee, while the paired blades Earth and Heaven are used primarily as melee weapons, although ranged combat is indeed an option.

Various copies of Genesis Rhapsodos wield gunblades capable both of firing bullets and rockets. They first appear during the attack on Junon and can be encountered on missions. Some Wutai troops wield polearms with guns built into the handles.

Yazoo and Loz both use two ornate Gunblades called the Velvet Nightmare in the film. Despite the fact that they are officially considered Gunblades, they are not seen possessing any notable cutting ability and are used mainly as guns, although they do possess a blade running along the top of the barrel, and a smaller blade along the bottom forming the front end of the trigger guard.

Weiss the Immaculate uses two lever-action rifle/katana hybrids that are similar to Gunblades in battle against Vincent, named "Earth" and "Heaven". These katana are capable of long-range fire albeit in single bursts, similar to a shotgun or rifle. Rosso the Crimson also has a Gunblade of a different variety, a dual-bladed sword with an ornate handle. The blades are capable of being rotated back in on themselves for ease of storing when not in use. A gun barrel emerges from the center of this handle at a ninety-degree angle to the blades, as opposed to many other models of Gunblade which feature the gun barrel running parallel along the blade. One of the Restrictors also carry a pair of automatic pistols (or Uzi) with blade attachments over the barrel that closely resemble bayonets.

The weapon's debut appearance; the Gunblade was the weapon of choice for Squall Leonhart and his rival, Seifer Almasy. It was a sword with a fire mechanism, such as a pistol (as with Seifer's Hyperion), or revolver (as with Squall's Revolver), which serves as the hilt for the blade. Despite its name, it could not be used as an actual gun, meaning it didn't fire projectiles, and could therefore only be used in melee combat, making it more like a gun supplementing a sword than a blade supplementing a firearm, e.g. a bayonet on a rifle. The firing of the Gunblade's rounds induced a tremor in the blade, causing it to deal additional damage to whatever it struck.

It is revealed in Dissidia that, because of how the Gunblade is used in order to achieve optimal performance, the weapon is considered an old fashioned and notoriously difficult weapon to use in comparison to regular swords. In gameplay, one must press the R1 button just as Squall strikes his opponent to pull the trigger. When Seifer is a playable character, using this technique is slightly more difficult because Seifer attacks much quicker.

There are seven gunblade types/models available for Squall to use throughout the game, plus Seifer's own model. Below is a list of the Gunblades present in the game.

Though not appearing in the finished product, designs for an unused class showing Yuna wielding a dagger sized gunblade can be found in the game's Ultimania guide among numerous other potential classes.

In Final Fantasy XII, Gilgamesh has the Revolver Gunblade amongst his collection of Legendary Weapons. However, like all his swords, it is slightly different, having an image of a Chocobo printed on the blade, no trigger and lacks the chain and Griever symbol.

Two of the guns in Final Fantasy XII, the Ras Algethi and the Antares, are guns with blade-like attachments on their barrels similar to Gunblade. The Ras Algethi gun looks similar to the Lion Heart: it has a light blue blade-type of barrel, along with a hammer shaped like a wing and a key chain on the handle similar to the Griever symbol. However, any similarities these weapons bear to Gunblades are purely cosmetic, and they cannot be used for melee fighting.

Also known in Japan as Dualweapon (デュアルウェポン, Dyuaruwepon), this unique weapon has the ability to transform between Gun-mode and Blade-mode. Possessed by Lightning in Final Fantasy XIII this weapon is capable of both melee and long-range properties. The Blade-mode does not possess the same trigger mechanism as the gunblades from Final Fantasy VIII, it just functions as an ordinary sword. Lightning's gunblade has a holster that swings behind the back of the wielder for the weapon to rest. In the web novelization Final Fantasy XIII Episode Zero: Promise, Sergeant Major Amoda mentions that Lightning's initial weapon, the Blazefire Saber, is a weapon only used by the most skilled soldiers. Below is a list of the seventeen Gunblade types/models available for Lightning to use throughout the game. 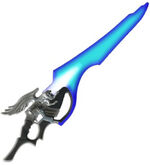 Squall Leonhart wields his Revolver in combat yet again, although this time the gun rounds cannot be triggered by the player, instead executed automatically, becoming part of the attack combo. Squall's attack style, called the "Relentless Revolver", centers around using the round to quickly recoil the blade back for a second strike, allowing him to use powerful multi-hit combos. Squall uses the Lion Heart in his EX Mode, increasing his range and letting him fire more rounds while attacking for extra damage.

A gunblade makes an appearance in Parasite Eve II as a weapon that the gorilla like Number 9 uses. Upon his defeat Aya can use the weapon as one of her secret weapons if certain objectives are met. It was aptly named "Gunblade".

In the massively multiplayer online role playing game World of Warcraft, players can obtain a Bind on Equip rare gun named "The Gunblade". Dropped by monsters of the mid-65 level range it requires a Level 65 player to equip. A bonus is that it increases attack power by 36 points upon equipping. The weapon only serves its function as a gun, and cannot be used as a sword.

A large amount of gunblade weapons appear in this game. All of them mainly acting as swords, but with a long range gun attack.