"I have discarded Wood and village. I won my freedom. Yet my past had been cut away forever. No longer can my ears hear the Green Word. This…solitude, you want, Mjrn?"
—Fran

Fran is a playable character in Final Fantasy XII. She is a Viera and is Balthier's partner aboard his airship, the Strahl. Fran is the only non-Hume character in the main cast. Her title is "Master of Weapons", as Viera are known for their extraordinary craftsmanship, grace, and intellect. Fran herself is also a skilled mechanic, being in charge of maintaining the Strahl.

Fran has the most mysterious life out of all the characters in Final Fantasy XII. Being a viera, she is reserved amongst people of other races, although not as much as others of her kind. All that is known is that she left Eruyt Village over 50 years ago to see Ivalice. It is later revealed that Fran has two sisters: Jote and Mjrn. It is hinted that they are blood sisters, as Fran tells Mjrn that only one sister remains to her before Fran leaves the woods. It appears that Jote is the eldest of the three, whilst Mjrn is youngest, based on their behavior and positions in Eruyt Village.

Considering Fran's age, Fran could have met Balthier during any time in his life. It is never hinted about how long they have known each other, or if Fran even knows about Balthier's past. However, while they keep their relationship professional, there are times when it is hinted it could be more than that, especially in the sequel, where she states that Balthier's methods of wooing her were different from Tomaj's of flowers and gifts.

Fran is first seen when Vaan is about to steal the Goddess' Magicite in the Royal Palace of Rabanastre. Balthier accompanies her while she is driving a hoverbike, which eventually crashes in the Garamsythe Waterway during their escape due to the Goddess' Magicite draining the bike's engines.

Fran, Balthier and Vaan make their way through the waterway and meet up with the Resistance, and come to storm the palace and confront the new Consul Vayne Solidor. The young woman they end up working with, calling herself "Amalia", turns out to be none other than Ashelia B'nargin Dalmasca, the princess who was reported dead. The group gets captured and Balthier, Fran and Vaan are thrown into the Nalbina Dungeon. Fran being a viera, is able to sense a way out. On the way, the group finds Basch fon Ronsenburg and team up with him.

Like all Viera, Fran is sensitive to the anomaly known as Mist. More than simply "sensing" it, she can feel it like a physical object. When the party is held by Judge Ghis, the mist from the Dawn Shard – the piece of nethicite Ashe received in Tomb of Raithwall – overwhelms Fran with a burning sensation, causing her to go into a frenzy and attack all enemies with her bare hands. This never happens again, but whenever the party enters an area thick in mist, they always make sure to ask Fran if she is okay.

The party manage to escape the empire and follow Ashe on her quest to Jahara and to Mt. Bur-Omisace. To get to Mt. Bur-Omisace the group must travel through the Golmore Jungle, but magickal barriers prevent their entry. Fran instantly knows the barriers have been set up by viera and opens up a way to Eryut Village, despite knowing she is not welcome there, having abandoned the Viera way of life as protectors of the forest. Once in the village they find out that Fran's younger sister, Mjrn, has gone missing. They find her from the depths of Henne Mines, being possessed by Venat and thus being driven insane. The party defeat the mist monsters and Venat releases Mjrn, whom the group take back to Eryut Village. Fran's elder sister, Jote, gives the party an item that lets them through the magick barriers. Before departing, Fran asks Jote to listen to the woods' voice for her, as she has lost the ability having spent too long a time away from the woods. Jote does as asked and tells Fran the wood longs for her, and is envious of the Hume that have stolen one of its own. Fran only smiles and says, "A pleasant lie, that."

The group eventually make their way to Pharos at Ridorana where Ashe attempts to destroy the Sun-Cryst. The mist escaping from the Cryst drives Fran mad, and she can barely contain herself. As Dr Cid is defeated and dies, his departing spirit possesses Fran for an instant, who speaks Cid's final words to Balthier, urging him to escape.

As an all-out war is about to break on Dalmascan ground the group make their way to Sky Fortress Bahamut to stop Vayne. After defeating Vayne, Bahamut's power goes out, and is about to fall on Rabanastre. Balthier and Fran stay behind to fix Bahamut's glossier rings and manage to save Rabanastre, though Fran is injured by falling rubble. Bahamut crash-lands outside the city and the pair is thought to have perished in the crash.

A year later, however, Vaan and Penelo receive a note from Balthier revealing that him and Fran are alive and well, and asking the two to join them on Cache of Glabados at Bervenia Palace.

Fran as she appears in Revenant Wings.

"Mysterious and quiet, as viera are wont to be. Fran shares a bond of unshakable trust with her fellow sky pirate and partner, Balthier."
—FFXII: Revenant Wings' instruction booklet

Fran returns in Revenant Wings along with Balthier. She is more of a secondary character this time, mainly focusing on archery. Her skills vary, including different status inflicting ones to some white magic related spells like Dispelga. Her Quickening, Gaze of the Void, removes all buffs on all enemies. It can be obtained by defeating Exodus.

Overall, Fran has generally low stats compared to the other party members. She is the only party member to not have a particular stat in which she excels in. Fran's Magic, is particularly low, second-lowest to Balthier. Her Vitality is also low, being the second-lowest after Basch, and her Strength is the second-lowest after Penelo. However, her MP is sufficiently higher than Basch and Balthier, even though it is the lowest of the three female party members. These all-around poor stats lead Fran to be most useful when equipping guns, as the damage dealt by guns are not affected by stats. Fran's beginning Licenses are also fairly close to several Quickening Licenses, which can boost her MP even more. Fran begins with the Licenses Bows 1, Bows 2, Shields 1, Light Armor 1, Light Armor 2, Heavy Armor 1, White Magick 1, Black Magick 1, and Steal. She is equipped with a Shortbow, Onion Arrows, Headgear, and Chromed Leathers.

Curiously enough, even though Fran's default weapon is a bow and she has bow licenses already learnt, Fran is actually the slowest character, together with Balthier, to use a bow - all the other characters' action time when equipped with a bow is faster. Final Fantasy XII: Battle Ultimania

In the English release of Final Fantasy XII, Fran is voiced by Nicole Fantl. In the Japanese release she is voiced by Rika Fukami, who also provided the voice of Sailor Venus in the Sailor Moon series. 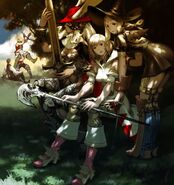 Artwork of Fran with Penelo and Ashe.

Promotional artwork of Balthier and Fran. 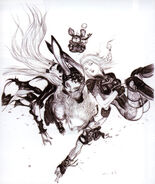