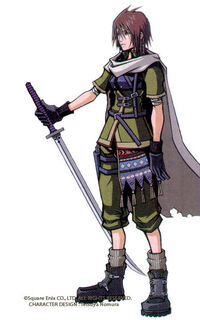 Elfé (エルフェ, Erufe) is a character in Before Crisis -Final Fantasy VII-. She is the leader of AVALANCHE, an eco-terrorist organization out to destroy Shinra. Elfé is somewhat quiet, decidedly taciturn, and surprisingly non-charismatic, yet she cares for her organization's members as if they are family. She was chosen to be their leader after the founder died. Elfé wields a katana, and her superb fighting capabilities have earned her much respect among the organization. She is strong enough that the legendary SOLDIER, Sephiroth, finds her power curious, complimenting her on it before she flees.

Elfé was born as Felicia (フェリシア, Ferishia), the daughter of the Turk leader Veld. However, one day their town of Kalm was burned down, and Elfé was separated from her parents. It is unknown how, but somehow she made her way to Cosmo Canyon, where she was raised by AVALANCHE. After the death of it's first leader, Elfé became the organization's head. At some point, Elfé has a special Materia grafted onto the back of her hand, giving her shielding abilities. Beneath her was Fuhito, a fanatic scientist, and Shears, a former bandit who respected and had feelings for Elfé. With funding and intelligence from Rufus Shinra, Elfé decided to lead AVALANCHE to destroy Shinra.

Over the course of the story, she is revealed to be getting gradually weaker despite her superhuman strength, both of which came as a result of the presence of the mysterious Materia—called "Zirconiade"—within her body and Fuhito's ambitions. As Elfé grows weaker, Fuhito takes more and more control over the running of AVALANCHE. Because Fuhito refuses to do anything to help Elfé, Shears leaves AVALANCHE and works with the Turks. Veld, after learning that Elfé is his daughter, leaves Shinra with the player Turks and Tseng.

This summon beast is drawn from her when Fuhito summons Zirconiade in an incomplete form. He is killed yet Elfé survives. She is saved by Tseng, who reports to have killed her and Veld, but they both escape to freedom from Shinra. While Elfe's later fate is unknown, as she has yet to reappear in any other part of the Compilation of Final Fantasy VII, her father makes an appearance in On the Way to a Smile: Case of Shinra during Meteor Fall and later helps with the events of the novella.

Elfé is fought as a boss in Before Crisis Chapters 3 and 14.