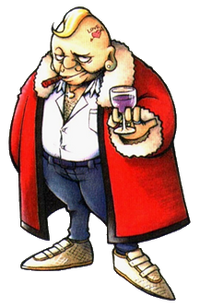 Ông trùm Corneo là một nhân vật không điều khiển được trong Final Fantasy VII. He is an obese, blond, mafioso-style leader who resides in Sector 6's Wall Market in Midgar, an area that is filled with shops, restaurants and a brothel known as the Honeybee Inn, which Don frequents. He is almost certainly named after and partially inspired by The Godfather character Don Corleone, although his name might be a language pun as well; "Don Corneo" is Spanish for "Mister Horny". It may also be a wordplay on poet Lord Byron's "Don Juan", a story about a ladies man with a dark past.

Don Corneo is a lonely, perverted man who is looking for some love. During Cloud and Aeris's visit to the Wall Market, they discover Tifa has gone in Don's mansion. What they do not know is that she is trying to get answers out of him about Shinra, and they assume Don kidnapped her as a sex slave. Cloud's attempt to enter the building is blocked due to Don's rule of "No males allowed" (apart from his underlings). He and Aeris devise a plan that involves Cloud dressing up as a girl to enter the palace. They then threaten him (by threatening to chop off, rip off, and/or smash "them") to make Don reveal his connection to Shinra and their plans. The scene is one of the many comedic scenes in the games that also serves to form player attachment to the characters. Don eventually releases a trap door and the party fall down into the sewers.

Don Corneo lives in a large house that looks rather like a palace, split into five rooms: The main room is a reception area of sorts; Don Corneo's "Throne Room" has a red carpet walkway and is where he lines up prospective girls for interview; Don's bedroom, through a door behind the Throne Room; a dungeon room of sorts which includes a torture rack (not unlikely to be for S&M); and the last room, a room for Don Corneo's underlings to stay, and do as they wish with the girls Don has rejected.

Don's connection to Shinra is that he was hired to reside in the Slums and collect as much information about AVALANCHE as possible. After he revealed Shinra's plan to destroy the Sector 7 where AVALANCHE was based, Don Corneo fled Midgar and headed to Wutai, with the Turks in hot pursuit. He managed to hide until his sexual lust drove him to capture Elena (of the Turks) and Yuffie, taking them to the statue of the god Da-Chao, where he ponders who he most desires out of the two. He is stopped once again by Cloud (or Tifa or Cid, depending on who is leading the party at the time) and Reno; While the conversation proceeds, Rude shoots Don, who hangs on, but has his fingers stepped on by Reno and plummets off Da-Chao, presumably to his death.

Don Corneo is not seen in the game, but he is referenced by a young girl in the slums of Midgar. She claims that her uncle dresses nicely, is kind to women, and that his profession is a "Don." Later in the game, a series of missions can be unlocked that pit Zack Fair against Corneo's forces in the slums.

The name Corneo makes a brief appearance in the Tale of Nanai, one of the three stories in the Zodiac Brave Story Sound Novels.