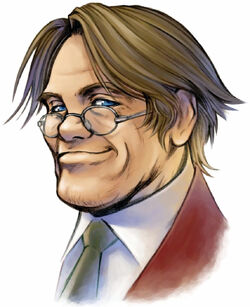 Forty years old at the start of Final Fantasy VIII, Cid is found to actually be the husband and Knight of the game's initial antagonist, Sorceress Edea. He is a compassionate soul who does not relish the time when he and his wife must confront each other on the battlefield.

At an unspecified time, Cid married a young Sorceress named Edea, becoming her Sorceress Knight. Edea was a caring woman who raised orphaned children in her orphanage in Centra. On a fateful night, however, a dying Sorceress appeared from the future attempting to pass on her Sorceress Power to a girl called Ellone. Edea, however, refused to let her do it and Ultimecia passed on her powers to her instead.


That night the Sorceress had been accompanied and pursued by another person from the future. This person gave Edea instructions on future events along with the instruction of the creation of SeeD as a check against Sorceress malevolence. Cid had to leave his wife in order to form SeeD, leaving her to look after the orphanage while he himself set about generating the funds required for such an organization.

He would eventually find a business partner in the Shumi known as NORG and together they set about funding and building the Gardens that would train SeeD members and act as bases of operations for when a Sorceress attacked. Cid would chose to reside in and headmaster the Balamb Garden, all the while keeping the safety of his wife and other innocent Sorceresses in mind as at some point a special SeeD force, known as the White SeeD, was formed to harbor and protect such innocents.

Years later, Sorceress Ultimecia possessed Edea, using her body as a vessel for her to exist within for that era of time. Within Edea's body, Ultimecia destroys the orphanage before embarking into political plans in Galbadia. Dreading the day he would have to face down his wife he begins to see talent in a SeeD student called Squall Leonhart. He personally gives Squall advice and assistance despite the responsibilities of his office and even gives him a potential Guardian Force to obtain.
102px

Later on, due to the actions of Squall's SeeD group, SeeD and the Gardens become targeted by Ultimecia, who had usurped Vinzer Deling as president of Galbadia, as a threat, and Balamb Garden comes under turmoil with the residents of the Garden split into two groups who were vying for control of the Garden; one that supported Cid in his views to fight the Sorceress, and one who supported NORG in his opinion to appease the Sorceress. However Squall and his group soon arrive and dispel the chaos just enough to save the Garden from a missile attack by Galbadia. Afterward NORG himself attempts to wrest control of SeeD from Cid but is defeated again by Squall. Coming to the realization that a confrontation with his wife was inevitable, Cid knew he lacked the compulsion to kill her, if and when the time came. Thus, he gave control of SeeD over to Squall, citing that he would offer advice if asked, and returned to the remains of Edea's orphanage.


Fortunately, the confrontation between Ultimecia and SeeD did not result in Edea's death and instead wrested Ultimecia (along with Edea's Sorceress Power) from her body, allowing her to return to her husband in Centra where the two would offer advice to both Squall; SeeD leader and budding Sorceress Knight, and Rinoa; a newly-awakened Sorceress who had inherited Edea's power.

Cid holds the Triple Triad card of Seifer Almasy; the renegade SeeD candidate who served his wife during her tenure as an evil Sorceress. He can be challenged for it on disc one in Balamb Garden's headmaster office, on disc two, at Fisherman's horizon, before going ashore, or in disc 3 while residing in Edea's Orphanage with Edea.