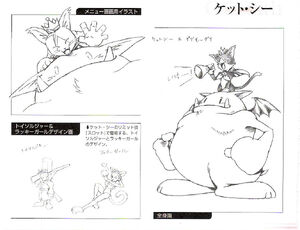 Cait Sith (pronounced Kett Shee) is a recurring character in the Final Fantasy series. Cait Sith has been a feline in all of its appearances, including those where it is found as an enemy monster.

Cait Sith is really a robotic cat (classified as "Toysaurus" by the game manual). He is controlled (and presumably created) by a Shinra employee named Reeve, who is sympathetic. Initially, Cait Sith joins the party in Final Fantasy VII with treacherous motives, eventually handing over the Keystone to Tseng. However, Cait Sith is intrigued with Cloud and his friends, and wishes to stay with them to make up for his betrayal, if not somewhat forcefully. He remains as a permanent member of the party and aids in the defeat of Sephiroth.

It is uncertain where the line of control in Cait Sith and Reeve breaks, because the two are capable of separate action and even separate motivation. It is to be assumed, however, that Cait Sith always speaks for Reeve, and vice versa.

Cait Sith is generally under-appreciated as a character due to his mediocre stats and less-than-memorable characterization, but also due to the fact that he is the only character to have fewer than four levels of limit breaks.

His first limit break, Dice, throws a series from 2-6 dice and deals damage based on the roll. The higher level Cait Sith is, the more dice he throws.

His second limit break Slots, is what most people remember him for. His slots can, in fact, mimic seven different Limit Breaks (giving him the same number as any other party member), but its unpredictable nature and potential hazard to the party makes most players skeptical. His ultimate Limit Break can instantly kill any enemy, even powerful side-bosses, but in lieu of a high damage dealer like Omnislash, it is considered a poor consolation.

Though Cait Sith's role in Final Fantasy VII is seen as minor, his role as Reeve in newer installments of the compilation is greater, as he founds the World Regenesis Organization to restore the planet after the harm is received from the original game.

Cait Sith is seen again in Advent Children to aid in the battle against Bahamut SIN, but is only given a minor role and only a couple lines of dialogue.

Cait Sith is an NPC in the Final Fantasy XI Wings of the Goddess expansion. Little is known about Cait Sith, but is generally referred to as the "Regal Feline".