Thanh Buster Sword nổi tiếng không chỉ bởi nó là vũ khí của Cloud, but its unique appearance, especially its massive size. It is possibly one of the best known swords in the Final Fantasy series, along with the Gunblade, Masamune, Excalibur, Ultima Weapon, Fusion Swords, Brotherhood, Save the Queen, and others.

The Buster Sword was originally the property of Angeal Hewley, Zack Fair's mentor. Angeal used it as little as possible to prevent it from being damaged, stating that "Use brings about wear, tear and rust.", when questioned by Zack. In the FMV where Angeal, Genesis and Sephiroth compete in a hologram training exercise, Angeal would wear the Buster Sword in its holder on his back, while using a standard SOLDIER sword to fight instead. The Buster Sword was created for him by his adoptive father when he first entered SOLDIER. Zack inherits the Buster Sword from Angeal after being forced to defeat him in his Angeal Penance form. Angeal spoke of the sword as a symbol of his honor. Zack seems to view it more as idealistic symbol of the honor of a SOLDIER, and even though he uses it with significantly greater frequency than Angeal, he admits to usually hitting with the blunt side. Zack issues the broadsword to Cloud after Zack willingly fights for his life to save both Cloud and himself. In doing so, he passes on to his friend his dreams of being a hero and his pride as a member of SOLDIER, telling Cloud that he is his living legacy, and proof that Zack lived.

The Buster Sword is Cloud's default weapon. Though it quickly becomes outclassed by new equipment it is a unique weapon in the fact that it is one-of-a-kind and that it cannot be sold. No matter what sword the player is using, the Buster Sword will appear in Cloud's hand during cutscenes and in the Motorcycle minigame, unless the player has acquired and equipped a Hardedge sword, stolen from SOLDIER forces in Shinra HQ. The Buster Sword has a base power of 18 and a base accuracy of 96. It has 1 linked Materia slot.

Due to the much clearer graphics seen in the film, details such as swirling patterns on the hilt, geometric etchings on the blade near the hilt, and scratches on the blade from three generations of use have become apparent for the first time. Also, the sword appears to be covered in rust from its time as a grave marker in the elements of the wasteland. Ironically, this peaceful use of the sword brought about what Angeal feared would happen had he used the sword for battle in the first place.

During the end of Advent Children Complete Cloud moves the sword to the Sector 5 Church, polished from its rusting in the wasteland.

In early footage of Advent Children, before the Fusion Swords were designed, Cloud can be seen fighting with the Buster Sword against Kadaj. The fight is identical to a portion of their battle in the completed film, albeit slowed down considerably.

A weapon very similar to the Buster Sword can be found in a weapon shop in Lindblum. If Zidane inspects it, he will give a reference to "a guy with spiky hair" who wielded a sword like it, most likely a reference to Cloud.

The Buster Sword is part of Tidus' equipment on the game disc. However, it is never actually seen in the game and can only be found by looking at the game's internal files. Behaving in a similar manner to Angeal and Zack, Tidus attacks with the sword's blunt edge.

Gilgamesh uses a fake Buster Sword, along with many other iconic swords from other Final Fantasy games. The Kanji character on the sword means "replica," or "fake." It also has four Materia slots instead of the two.

The Buster Sword re-appears in the sequel with similar attributes, and can still be wielded by the Soldier, Warrior, and Dragoon jobs, as well as the new Spellblade job. It now teaches the Blood Price ability to the new job as well.

Thanh Buster Sword appears both as Cloud's weapon trong tất cả các cuộc chiến, and as a Level 1 greatsword exclusive to Cloud that increases Attack by 5. Có khả năng vìDissidia phần lớn dựa trên những trò chơi nguyên gốc, thanh Buster Sword giữ lại thiết kế đơn gian của nó từ Final Fantasy VII and does not feature the swirl patterns or other graphical changes seen in Advent Children and Crisis Core. Like other weapons, Cloud can summon the Buster Sword to battle by making it appear in his hands. Bartz also owns a copy of the Buster Sword he can be seen using during some of his moves. 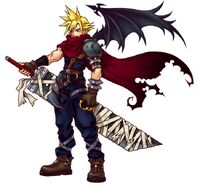 Cloud wields a Buster Sword wrapped in bandages when he fights in the Olympus Coliseum.

In the Epilogue, when Fighter and Black Mage realize they are lost, the Buster Sword is seen along with the Revolver in "Akbar's Not Useless Tools" shop.