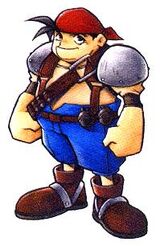 Biggs and Wedge are minor characters in Final Fantasy VII. They are members of AVALANCHE under Barret Wallace. Unlike other duos named Biggs and Wedge in the series, they come with a third friend, Jessie. Biggs (left) and Wedge (right) are good people and care about the people around them. Wedge, being the weakest-seeming of the group looks up to Cloud. They are not fighters and instead work in the technological areas of AVALANCHE's attacks. They take part in the attacks on Midgar's Sector 1 and Sector 5 Reactors When Shinra attacks Sector 7 to drop the Plate upon the Slums, Biggs and Wedge try to fight to defend the town. They are badly wounded - perhaps even fatally - along with Jessie. Wedge is thrown from the Plate support and dies next to Cloud, glad that Cloud remembered his name. Biggs dies feeling he deserves punishment for the destruction he created by destroying the Sector 1 Reactor.

It is known that Wedge had a little brother. During the second bombing mission near the beginning of the game, it is possible to talk to him while he is in disguise (this can be tricky, since his body is barely visible behind the other characters). If you do, he says he looks just like his little brother.

In Dirge of Cerberus -Final Fantasy VII-, Biggs and Wedge get a brief mention. While on the missions in Midgar's Train Station, Vincent can talk with a girl from the World Regenesis Organization. She says that her brother had been part of a rebel group which was against Shinra, and that he had died two years earlier. This is implied to be either Biggs or Wedge.

Biggs, along with his friend Jessie, are shopkeepers in Twilight Town while Wedge is a shopkeeper in Radiant Garden, though they look nothing like the characters in Final Fantasy VII.