Baaj is a mass of ruins off the mainland of Spira, situated south of the Island of Bikanel in Final Fantasy X. The location is the first that may be truly explored by the player, and is critical to understanding the emotional development of Maester Seymour Guado, one of the game's major antagonists.

Baaj was a great island city before an attack by Sin left the underlying geology permanently destabilized. Most of the city collapsed into the sea, save for a series of interconnected ruins surrounding the Temple.

Baaj Temple is the only remaining building on the archipelago, though it is in very poor structural condition. The entrances are all submerged conduits and may only be accessed by swimming through fiend-infested waters. As a former temple of Yevon, it shares the style and iconography with the other temples but the cloister of trials and the main antechamber have been lost to the sea. To access Baaj Temple, you have to get the airship. Then you have to talk to Cid and go to the coordinate option. List the coordinates X=11-16, Y=57-63. Baaj will then be an option for one of your destinations. It is essential for receiving the Aeon Anima. Baaj is not accessible in Final Fantasy X-2.

28 years before the beginning of the Eternal Calm, Jyscal Guado, Maester of Yevon and leader of the Guado people, married a Human woman and together they bore a son named Seymour. The Guado, well-known for being highly intolerant of other races, were angered by their leader's perceived blood-treason and threatened rebellion. To secure peace for all parties, Lord Jyscal dispatched both wife and son to Baaj Temple, at that time an extremely grand building.

Mistrusted by Human and Guado alike, Seymour lived in exile for nearly his entire childhood and grew fond of the temple. As an adult, Seymour rejoined the Guado and became a priest of Macalania Temple before having the body of his mother, by this point the Fayth of Anima, relocated to Baaj Temple. Seymour often revisited the Fayth while deciding whether to carry out his plan of becoming the new Sin and destroying all of Spira.

Shortly after Seymour left Baaj for the last time - less then ten years prior to the game's story - the temple was attacked by Sin and reduced to the scene of dank desolation that greeted Tidus following his arrival from Dream Zanarkand. Separated from Auron, Tidus began to explore the ruins alone when he was attacked by Geosgaeno. Barely escaping with his life, Tidus wound up in a ruined chamber of the temple before being rescued by Rikku and her Al Bhed salvage squad.

The party may return to Baaj later in the game to defeat Geosgaeno and access the temple. On entering the Chamber of the Fayth, the party talks with the spirit of Seymour's mother and views a flashback of Seymour in the temple as a young boy. Seymour's mother then grants Yuna the ability to summon "The Dark Aeon" Anima.

The player has to open the treasure chests in each Cloister of Trials of the six main temples (Besaid, Kilika, Djose, Macalania, Bevelle, and Zanarkand) in order to break the seal which guards the entrance to the Chamber of the Fayth.

"Creep" is played in the Submerged Ruins of Baaj, a slow and dark music track. "Out Of The Frying Pan" is played during the time Tidus is trapped in Baaj Temple. 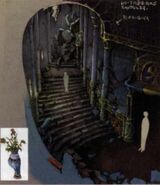 Artwork of the staircase within Baaj Temple