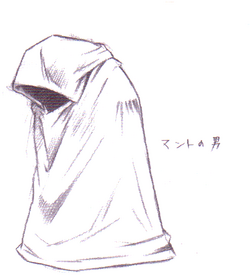 The Sephiroth Clones are a group of test subjects used in the Project S portion of the Jenova Project in Final Fantasy VII. They were injected with Jenova Cells by Professor Hojo to test Jenova's ability to recall her scattered cells into a "Reunion", in what he called the "Jenova Reunion Theory". There are at least fourteen known test subjects, but Hojo rejected many as "failures", leading the exact number of unfortunate people who were mutilated by this subject to be unknown.

In the original Japanese script, they were simply known as Sephiroth Copies. "Clone" is in fact a misnomer; subjects were infected with Jenova cells in an effort to reproduce a similar effect to that of Sephiroth -- who eventually exerts control of the subjects as his puppets -- rather than being genetic copies.

After the events of the Nibelheim Incident, Professor Hojo rounded up the survivors of Sephiroth's rampage. He injected them with Jenova Cells and exposed them to Mako Energy, similar, if not identical, to the creation of a SOLDIER. However, these people were not the finest in physical and mental fitness, thus they could not keep their own egos and became shades of Jenova. Since Jenova was a puppet of Sephiroth, the Clones too became fanatics who would do anything for their master Sephiroth. Those that were proper slaves were engraved with a number someplace on their bodies, those that failed and kept some shred of their egos were left to die. Cloud Strife would have been a success as well had Zack not intervened and rescued him from the Shinra Mansion. Zack, also a Sephiroth Clone, was a total failure. He seems to not have been mentally affected by the experiment at all due to previously being unaffected by the identical SOLDIER procedure.

The twelve Sephiroth Clones that succeeded become the group of fanatics that follow Sephiroth around in Final Fantasy VII. Strangely, the Sephiroth Clones did not migrate to Jenova as Hojo predicted. Rather, the twelve began to head to the Northern Crater and hunt for the Black Materia for Sephiroth. Jenova herself broke out of Shinra Headquarters and moved towards Sephiroth in his form and under his complete control. Cloud was influenced by both the unconscious need for Reunion and his drive to avenge Nibelheim.

In the end, only Cloud survived the journey to the Northern Crater. All the others died on the way. Because Cloud was simply a semi-failure, he had his own mind and ego, but Sephiroth could take complete control of him at will. However, this power seems to be somewhat limited, as Cloud refused Sephiroth's command to kill Aerith Gainsborough. When Sephiroth reveals that Cloud is a slave and his past an illusion, Cloud breaks down and accepts his fate as a Sephiroth Clone. He hands Sephiroth the Black Materia and is flushed into the Lifestream.

Later, with the help of Tifa Lockhart inside his subconscious, Cloud rebuilds his psyche and is restored to normal humanity. With that, the Sephiroth Clones are finished.

However, in the film Final Fantasy VII: Advent Children, the children infected with Geostigma each carry a small portion of Jenova's cells. Kadaj tells Rufus Shinra that "[his] brothers and sisters who share Mother's cells will all assemble" as part of the Reunion he and the other Remnants of Sephiroth are planning. Thus, while those infected with Geostigma are different from and are never referred to as Sephiroth Clones, their role in the film is roughly the same.

Below is a list of every Sephiroth Clone that have been revealed. This list is certainly missing several Clones, for many numbers are missing.

The Ex-Soldier who runs a weapon shop in Junon uses the same model as the clones. In game, he states that a while ago, he suddenly felt the urge to dress like this, intimating that he may be one of the failed experiments.

In an early version of the game script, the Sephiroth Clones were not people, but rather parts of Jenova floating in the air covered by their cloaks. During important plot points, they would reveal themselves to be pieces of Jenova's body: her right arm, heart, etc. They also replaced Sephiroth in several scenes, such as the pivotal one in the Forgotten Capital.