"A cheerful youth who skillfully uses a variety of weapons in battle. Confident in his skills, he fearlessly enters any fierce battle."
—Description

Vaan is one of the new characters introduced in ディシディア デュオデシム ファイナルファンタジー. Vaan is a young man who lived on the streets of ダルマスカ and dreamed of being a Sky Pirate. But during a heist, he met two pirates and was thrown into a war between his home country and the Archadian Empire. He is capable of using a variety of weapons and his EXバースト is based on his ミストナックs from ファイナルファンタジーXII. 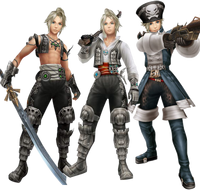 Vaan's appearance is identical to his original Akihiko Yoshida design from Final Fantasy XII, although he is slightly less tanned. He has blond hair and his eyes are blue-grey. He wears a loose cropped open vest held together by a pendant over his chest, which once belonged to his deceased elder brother, Reks. He also wears dark pants, tucked into his knee-high steel boots, held up by a red sash.

Vaan's first alternate outfit is named "Gunmetal Vest", and is based on Amano's artwork. His outfit is black and gray and features a different shoulder design, which adds snake-like shoulder pads. In this outfit he gains a tattoo on his left shoulder. He gains a new gauntlet design as well, and his accessories are colored green. His brother's pendant is now attached to a necklace, rather than acting as a clasp for his vest.

Vaan's second alternate outfit, "Conflicted Hero," is his design from Final Fantasy Tactics A2, which features a shirt under his vest, gauntlets that are no longer fingerless and cover the entirety of his wrists, slightly different knee armor, and an ornament on his waist.

A DLC costume has been announced for Vaan, which is said to be entirely original. It is unknown when it will be released.

The color of Vaan's Manikin, the Idle Sky Pirate, is Gold.

At some point, Vaan encounters the Onion Knight, and can't get over the fact that Onion Knight is a kid, so he tries to treat him like a little brother, to Onion Knight's annoyance.

After receiving his dormant crystal from Cosmos, Vaan travels with Lightning, Laguna and Tifa, but they end up getting separated when they are attacked by both Kuja and Kefka and the Manikins. While on his own, Vaan encounters and fights a brainwashed Terra before she suddenly runs off. Later, on the Sky Fortress Bahamut, Vaan finds Terra being confronted by Kefka over her unwillingness to fight. Though he attempts to walk away, he takes offense to Kefka torturing Terra and intervenes. After fighting Kefka, Vaan grabs Terra and flees with her. After they escape, when Terra asks him to kill her, Vaan refuses and explains that though they are on opposing sides, he saved her out of choice and gives her the strength to reach her resolve of not fighting. But later on, convincing her to go into hiding, Vaan promises Terra to find her before fighting Chaos so she can meet Cosmos and become one of her warriors.

Later, after finding Laguna, they find Yuna and an unconscious Tidus, after the Emperor has kidnapped Jecht. They manage to cheer her up, and return to Cosmos and talk to Lightning and the Warrior of Light. Joining Lightning's suicide mission to stop the Manikins, Vaan keeps himself by giving something to look forward to in what the Manikins' world looks like. Eventually succumbing to the Manikins, Vaan sheds his light and fades away.

テンプレート:See Also Vaan's fighting style is Adroit Attacker. He wields a variety of weapons, including swords, greatswords, shields, katanas, guns, crossbows, axes, staves and spears. When Vaan attacks he automatically switches weapons, and that weapon remains equipped until he changes it again. When Vaan changes weapons prior to attacking, this triggers a "Switch Attack," where the attack is slower, but has special properties and higher strength. This requires the player to properly time his attacks to ensure the most damage done. Vaan's HP attacks leave him barehanded, and are based on the Concurrences of Final Fantasy XII. A downside to Vaan's battle style is that "Switch Attacks" are slower than regular attacks, giving enemies time to dodge and counterattack him. 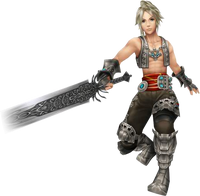 Vaan's EX Mode is Obtained all Licenses, symbolizing his mastery of the License Board by exchanging each of his weapons for a more powerful version of the same type of weapon. In his EX Mode Vaan gains the abilities "Free Switch" and "Zodiak." Free Switch allows Vaan to put away his weapons without attacking by pressing R and

, while Zodiak increases his stats and allows him to perform a follow-up attack when landing a Bravery attack.

Vaan's EX Burst is Quickening, based on his Quickenings from Final Fantasy XII. His EX Burst functions identically to Gabranth's: the player must shuffle and input commands within a time limit and input them in the proper order. Linking all of his Quickenings, Red Spiral, White Whorl and Pyroclasm, has Vaan end the EX Burst with Luminescence, where he traps the opponent between two energy crests and consumes them in a blast of holy light.